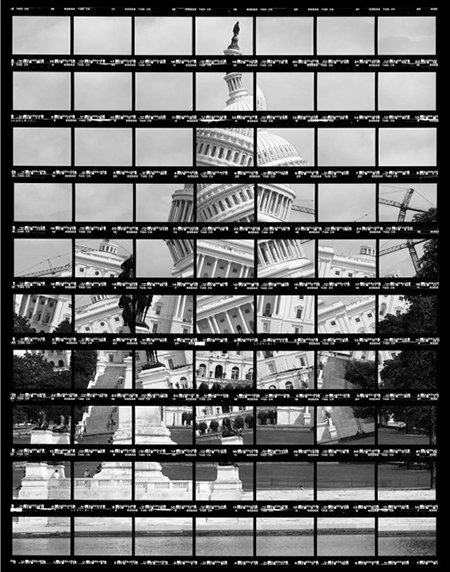 Near the entry to Thomas Kellner’s show there’s an image of the United States Capitol Building. Or rather, 70 photographs brought together to form a topsy turvy view of the iconic structure. Arranged on a contact sheet, the grid of images explodes the building into a Cubistic fortress. The piece brings to mind the impossible architecture of M.C. Escher, or the off-kilter facades of Peter Bruegel the Elder’s “Tower of Babel.” It also, inevitably, reads as a comment on the fragmented state of our political discourse. Throughout the exhibition, Kellner seems to slip comments on current or historical events into his work. He pries the Eiffel Tower apart in a series of black-and-white grids, transforming it into a many-headed snake and an imposing pyramid. If Jean Jullien’s painting of the tower as a peace sign represents that embattled city’s aspirations, these works capture its dark, complex reality. A view of Big Ben à la the Leaning Tower of Pisa evokes the rupture of Brexit, and a rippling Golden Gate Bridge recalls the city’s earthquake-riddled past.

Kellner’s works might represent visions of a world in violent flux, but his process is surprisingly neat. Tucked in the back of the exhibition is what might be called a photo-mosaic of the Neuschwanstein Castle from the artist’s native land of Germany. Beneath the piece are two sketches that reveal his careful method of studying the intricacies of a building’s architecture, and marking off each image on a numbered grid to create the final work. Suddenly, an ordered infrastructure leaps out from works that previously seemed chaotic. Kellner carefully aligns images on the bottom row of his contact sheets to create a stable platform for his teetering structures. In his depictions of bridges — which often resemble tangled spider webs — he’ll often embed an image at the center that suggests a linear perspective. At times, he’ll hide figures within his works, in part to offer a sense of scale. Upon a second look, these works seem to represent a refreshing plurality of perspectives that unify into a single image. Perhaps there’s hope after all.