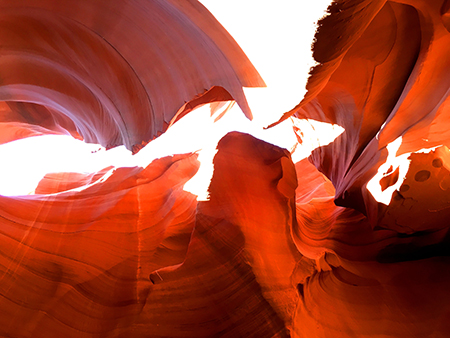 I spent the summer as a tourist in a foreign land (Australia) and in my home country. Nobody likes to think of themselves as a tourist. In "The Sheltering Sky" author Paul Bowles pinpointed the differences between the tourist and the traveler: the former scurrying home with tacky souvenirs after a few weeks abroad, the latter roaming for years, "belonging no more to one place than the next." Our unflattering mental picture of the tourist — Hawaiian shirt, Bermuda shorts, khaki bucket hat — wouldn't be complete without a clunky camera hanging from a neck strap. Today, however, the tourist takes pictures with a smartphone camera — a device that has radically democratized photography and given the lay public the experience (or perhaps more accurately, the illusion) of being an actual artiste. I'm deeply conflicted by this development.

On one hand, I think that in many ways the phone-camera revolution has sharpened our aesthetic eyes. I've experienced this first-hand. For three months this summer in Australia and then for a fortnight in the slot canyons of the American Southwest I stood among the iPhoners zooming in, cropping out, and uploading choice images to Facebook and Instagram. I marveled that my phone sometimes took prettier pictures than my SLR camera. Thanks to the experience of mastering smartphone cameras, non-photographers have gained an appreciation for aspects of photography they otherwise wouldn't have any inkling of. In our image-saturated culture, people know a good image when they see one. They know if the pictures they take pass muster. And so they tweak their techniques; they learn what works; they take photos that will get them the maximum number of "Likes" on social media. They become better at composing and editing images. How can this aesthetic democratization not be a good thing?

And yet I can't help but feeling that iPhones have corrupted a realm that ought to be left to the Adamses, Arbuses, and Avedons of the world, who not only knew their f-stops from their ISO's, but spent decades peering into the souls of sitters and landscapes, gradually earning their medium a hard-won parity with painting and sculpture.

Today, by contrast, we find ourselves in an environment of digital dabblers. If Pop Art leveled high and low cultures, the digital revolution has leveled amateur and pro. Specialized knowledge acquired over a lifetime is no longer a prerequisite to become a self-styled expert in any field. Everyone can be a critic on Yelp, a pundit on Twitter, a cinematographer on GoPro, a porn star on Xtube, and yes, a photographer on Instagram and Flickr. Technology has democratized these realms, but it has also cheapened them, lowered standards, and created a populace that is losing the ability to discriminate between bona fide artists and dilettantes.

Certainly there are compelling arguments for pressing forward with technology and not holding onto old-fashioned ways of being. In August, Anne Trubek provided a litany of them in her essay, "Handwriting Just Doesn't Matter," in the New York Times. When sentimentalists and reactionaries cling to cursive handwriting in an age of keyboarding, Trubek held, they are aligning themselves with dinosaurs who would prefer us still to "carve words into stone, dip pens into ink, or swipe platens of typewriters …" The same claim could be levied against those who would leave photography to the photographers. Still, I felt, as I stood in Antelope Canyon, Arizona, one of hundreds of tourists fiddling with their phones rather than truly communing with that astounding place, that something was missing: engagement with the physical world. What if we left the capturing of those dramatic swirls of rock to David Muench or Rodney Lough, Jr., and just enjoyed being there? What if we gazed not down into our screens but up at the work of God, nature, or whatever you want to call this miracle wrought by millennia of rain, wind, and erosion? If we spent less time staring into devices and more time studying and savoring the world around us, perhaps we would remember that the best and most enduring pictures are the ones we take inside our minds.