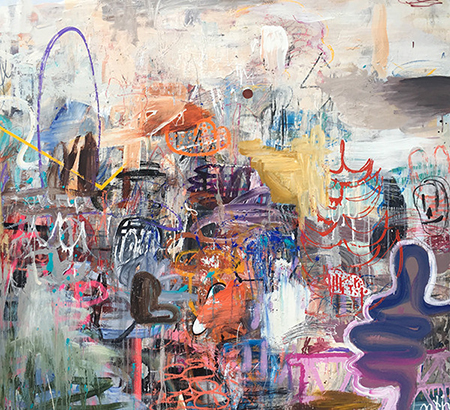 Portland artist Michael T. Hensley is a good example of regional modernism, abstract painting developed in relative isolation, often without knowledge of better-known artists more familiar to urban audiences outside Oregon. The 13 mixed-media-on-panel paintings are all related to one another for their similar appearance and image sources, the detritus of everyday street life, studio inspirations and pulsing, top-to-bottom, ordered compositions. Order is brought out of chaos, but the chaos is very well mannered, not at all angry or violent. The results are agitated surfaces that seem fragments of worn-out billboards or washed-out poster walls.

With bright colors, roughly textured surfaces and slathered-on paint, Hensley is an exponent of a genuinely regional style, Portland’s celebrated “painterly painting.” Carl Morris, Lucinda Parker, Laura Ross-Paul and others build up paint thickly to reveal and conceal latent imagery. With Hensley, myriad stabs and sketches of paint produce ascending compositions, usually with an emptier top third and a bustling bottom two-thirds. “Headed East.” “Iris” and “Zona Rosa” all adhere to these rules, each with its own distinctions. “Headed East” is the most chromatically austere, all black, white and brown, with a white shower at its upper edge. “Zona Rosa” may allude to one of Mexico City’s most diverse neighborhoods. It has a street-fair, celebratory quality that is mitigated by a tall purple loop and an outlined “thumbs-up” sign in the lower right-hand corner.

More fully composed, “Blow Out,” “Ed Batty” and “Potato Guard” fill in the customary three-by-three foot squares with multiple layers of organic shapes, cartoon thought-bubbles and swaths of smeared paint. The latter introduces graffiti-style tags, such as the word “bar” at its base. But here, as in other examples using graffiti word fragments, there is nothing of the rebellious or violating nature of real graffiti with its sneering attitude to private property and public real estate. It functions rather as a formal device that helps concoct busy, combustible paintings with a welcome range of colors, marks and barely perceptible figurative images. In “Blow Out,” so many colored outlines create a see-through, ghostly plan that suggests peeling paint or the passage of time. More importantly, each painting is an autonomous, individually attacked and conquered panel. Working on panel, there is no room for sensitive facture or seeped-in color; everything is uniformly jabbed and stabbed. The problem is, there is no overall related mood other than energy and frank execution. As with the other painterly Portland painters, material trumps idea; image is subordinated to additive layers of paint.

Rounding up the usual suspects of inspiration, African-American artists Jean-Michel Basquiat (seen in “Not Pretty”), Radcliffe Bailey (hinted at in “ONOK”) and Mark Bradford (see the smaller “Landfill” and “Pull”), Hensley is still seeking an original, individual vision. However, at 49, time is running out. Exquisitely created with sumptuous material overkill alternating with scratched-out, dug-in areas, the Seattle paintings are a glimpse of a still-promising artist, but, apart from a solo show last year in Atlanta, one still not ready for prime time. The artist has also executed a number of permanent and temporary public art pieces in Portland, including a few murals. It would be interesting to see, à la Bradford, what Hensley could do with a considerably increased scale. They could be explosive, rather than the smaller fires here that are hard to put out.