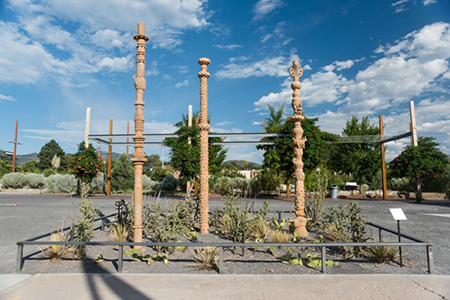 Mariana Castillo Debal in collaboration with Taller Coatlicue, Atzompa, Oaxaca, Quién medirá espacio, quién me dirá el momento? (Who mil measure the space, who will tell me the moment?), 2014-15, ceramics (mud from Atzompa,

"SITElines.2016: Much Wider Than A Line" is much better than the SITE Santa Fe Biennial has been in a while. Not since the glory days of Curator Rosa Martinez’s "Looking for a Place" or Dave Hickey’s spectacular "Beau Monde" has there been a major SITE show of such relevance. Crafted by an international team of 5 curators, assembled and overseen by Director Irene Hofmann, the show features over 35 artists from 16 countries. There are 11 newly commissioned works. The curators, Rocio Aranda-Alvarado, Kathleen Ash-Milby, Pip Day, Pablo Leon de la Barra and Kiki Mazzucchelli hail from Chile, Albuquerque, Montreal, Mexico and Brazil, respectively. All are solid scholars of the art and histories of their parts of the planet.

The exhibition shifts SITE’s standard East-West axis (building provenance for NYC and L.A. artists) to North-South for the purpose of presenting a contemporary vernacular of American art, meaning all of the Americas, not just the U.S. of "Alright Enough Already." This move orients nicely with the massive influx of contemporary artists of First Nations ancestry into Santa Fe over the past decade, and evolving definitions of New Indigeniety on both continents (and Cuba), which emphasize a spiritual relationship to land and water alongside ethnic identity.

High points in the exhibition start outside, where three Mariana Castillo Deball stacked sculptures of faces, pots, and nature forms bake in the high desert sun, like totemic magi, assembled in greeting and guardianship. "Who would measure the space, who would tell me the moment?" reads the query of the poetic title. Easy answer: Art critics.

The cavernous space within is divided into smaller galleries. An organically angled hole in the wall leads from the lobby to an initial encounter with an installation of images and information, by local architect and writer Conrad Skinner, concerning the currently contested Paolo Soleri Amphitheater. Designed by the innovative Italian under the auspices of Lloyd Kiva New during his tenure administrating the Institute of American Indian Arts at its former location, the highly imaginative but sadly shuttered outdoor theatre space inhabits the grounds of the Santa Fe Indian School (in the news last June for Michele Obama’s especially moving graduation speech). The installation also includes a wood and clay sculpture of the theater done to scale by Santa Claran artist Eliza Naranjo Morse.

Architectural space becomes intimate in "Comunicando con Tierra," an womblike adobe construction housing that may be entered to view a video showing the gathering and sharing of the earth for the project by Marta Minujin. First constructed in 1976, this piece portends the idea of post-industrial technologies at the service of environmentalism, making literal an earth-centric vision of culture.

Conceptualist Raven Chacon’s vision includes the next generation. The Native American Composers Apprentice Project he founded in 2004 affords the opportunity to see sheet music and listen to accomplished, avant-garde student works. Xenobia Bailey’s "Sistah Paradise’s Great Wall of Fire Revival Tent," based upon traveling evangelist’s tents from back in the day in the Southeastern U.S., is exquisite eye-candy, packed with mystic punch and psychedelic passion. It receives a drumming echo in Jeffrey Gibson’s "Like A Hammer” installation. Strong text-drawings appear on the wall behind an elaborate robe of many metal jingles the artist performed in as the pieces were produced. There is a hard-hitting sense of decolonized empowerment. Both pieces cast ceremony as post-modern praxis.

From the room of Sonya Kelliher-Combs' incredibly haunting “hide” painting-objects, to Maria Cabrera’s saguaro cacti stitched together from U.S. Border Patrol uniforms, to Nonyuan artist Abel Rodriguez’s delicate ink and pencil plant pictures of his homeland, "Much Wider Than A Line" establishes, at least aesthetically, new open spaces in a nuanced, multi-cultural dialogue about what it really means to be American (in the widest possible sense) today.