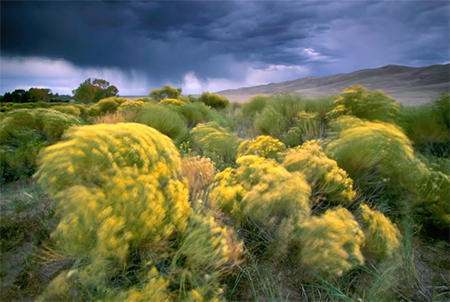 Every year millions of people from all over the world visit America’s national parks to view grand landscapes and unspoiled nature. Resources provided by the National Park Service inform the curious about America’s history, values and culture. The diversity of the flora and fauna, the peaceful and breathtaking views and solitude one finds in them offer an escape from the normal cacophony and distractions of modern life. One’s mind gets replenished; one’s spirit rejuvenated. President Theodore Roosevelt promoted nature’s positive effect on the human soul years after he temporarily left New York and politics in 1884 to join cattle raisers in North Dakota as a way to deal with the deaths of his wife and mother.

“100 Years of National Parks” is a four-part series of exhibitions that honor the efforts of the National Park Service, the Federal agency that manages all U.S. national parks and many American national monuments. This show is the fourth and final installment celebrating the Service's 100th birthday, here emphasizing the parks located in the eleven western states, as seen through the eyes of more than 30 photographers.

Among the color photographs, Art Wolfe’s “Thunderstorm,” depicting a gale force wind approaching at the Grand Sand Dunes in Colorado, beautifully conveys the outsized power of nature. The rabbit grass of the foreground serves as a metaphor for the resiliency of human nature; people with strong support systems will weather the storms of life. Then, there is an image by Madrid-based photographer Felix Gil de la Casa that shows a single American bison shot from a distant elevated position wandering along Yellowstone’s Upper Geyser Basin. This image catches one’s eye because of its delightful color combination — turquoise, earth colors, yellow and orange. The bison is shown on atypical ground, away from its usual grassland habitat. La Casa’s image has political relevance, because in May 2016 President Obama announced the bison to be the country’s first national mammal, one which almost faced extinction in the late 1800s.

A photo by Kevin Ebi captures the motion of the clouds above the Devils Tower in Wyoming. The silhouetted image provides a strong contrast to the bright blue that’s almost swallowed up by the dramatic overcast sky that appears like an open hand fan. This produces the impression of being the disruptive force in an otherwise peaceful setting. The Devil’s Tower is of importance in conservation history, because it was the first declared U.S. National Monument.

There are many folklores as to how the Devils Tower was formed. The one of the Kiowa and Lakota Indians is that there once was a group of girls who were chased by giant bears. To save themselves they climbed on top of a rock and prayed to the Great Spirit. Their prayers were heard, the Great Spirit made the rock rise from the ground towards the heavens so as to protect the girls from the bears.

Among the black-and-white images are the works of Rich Greene and John Fisanotti. Green’s well-composed “Chaco Kivas” records the remarkable complex of stone and earth dwellings of the ancestral Pueblo Peoples, located at the Chaco Culture National Historical Park in New Mexico, a UNESCO World Heritage Site. Fisanotti’s “Afternoon at Yellowstone Lake” attracts the eye through its stunning atmosphere, produced by a spectacular cloudy skyline that converges towards some gnarly random driftwood in the foreground. This image was taken at Yellowstone — designated the first National Park of the U.S. in 1872 by President Ulysses S. Grant.