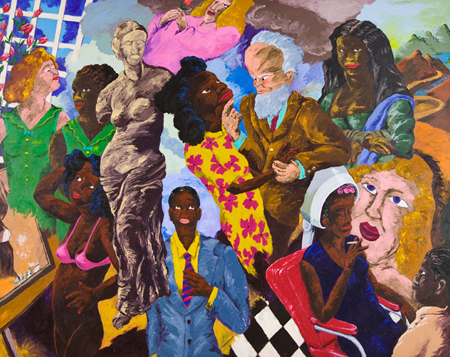 “30 Americans,” the touring exhibition drawn from the Rubell Family Collection in Miami, is currently at its only West Coast venue. Chief curator Rock Hushka has emphasized six African-American artists with ties to the Pacific Northwest: Robert Colescott, Noah Davis, Lorna Simpson, Hank Willis Thomas, Mickalene Thomas and Carrie Mae Weems. Still on tour years after its 2008 debut in Miami, the Tacoma version is generously displayed, providing a wonderful introduction to painters, sculptors, printmakers, and videographers whose stature in a few cases was higher a decade ago than now. For the most part these artists have been validated by the largely white East Coast museum and gallery establishment. For example, Kara Walker, whose long “Camptown Ladies” (1998) spotlights scenes of sexual violence and coercive scatophagia, has been singled out as the subject of a whole book, “Kara Walker—NO! Kara Walker—YES! Kara Walker--?,” by black artists and curators who accuse her of catering to white audiences with her graphically explicit scenes of torture and murder of blacks by whites, perpetuating guilty stereotypes.

Most artists here — and there is a mix of well-known and not-so-well-known — are included with only one or two works. As a result, there is nothing in depth about any of them, but lots to sample and savor. Restricted to what the Rubells collected, “30 Americans” showcases a flowering of contemporary art that continues today but is essentially a decade-old time capsule.

Among the most outstanding works is a large (9 by 9 ft.), magnificent portrait of a home boy by Kehinde Wiley that is inserted into an appropriation of a Velázquez equestrian scene. Wearing a red sports hoodie, the 2005 painting is empowered, seated on a white steed. The most successful of the first wave of these artists, Jean-Michel Basquiat (who died at age 27), is represented with “Bird on Money” (1981), a good example of how his origins as a Manhattan graffiti artist led to large-scale collage paintings.

A generation older, Robert Colescott taught at Queen Anne High School in Seattle during the 1950s. “Pygmalion” (1987) masterfully toys with the ancient Greek myth of the sculptor Pygmalion whose artistic creation, Galatea, comes to life. In Colescott’s hands, a white-bearded old man (clearly the author of a play of the same name, George Bernard Shaw) is gazing at a beautiful black woman. Other black women, posing as Venus de Milo and Mona Lisa, surround them. A young black man peers up from the picture’s lower center area. Colescott’s ability to compress decades (or centuries) of history and also contain contemporary references in crowded, raucous compositions is echoed by his successor, Kerry James Marshall, now 60. His “Souvenir” (1998-2000) is a huge let-down, however, a skimpy, three-part wall assemblage. Best to focus on his recently completed Chicago retrospective [See Robin Dluzen’s review in the September 9, 2016 Newsletter — Ed.]

Better at expressing Colescott’s legacy as well as Marshall’s influence, several younger painters address racial history, stereotypes and current culture while propping up  the practice of painting. John Bankston’s outlined, illustrational style retains Colescott’s humor in the former’s fashion face-off between two men in “Man’s Country I” (2004). Nina Chanel Abney’s 9 1/2 by 15 ft. “Class of 2007” (2007) makes African-American art students the majority in art school for once. Like Bankston, she has a welcome light touch that still makes its point. Jeff Sonhouse’s “Exhibit A” (2005), another appropriation (in this case of Francis Bacon’s popes) adds all the necessary ecclesiastical bling, but set upon a black cleric. Henry Taylor idolizes black Olympian Carl Lewis in “The Long Jump by Carl Lewis” (2010) and alters a photograph by placing a Nike swoosh trademark on the shaved head of a black runner. Noah Davis, Seattle-born and recently deceased at 32, used found photographs for his solemn, tightly cropped scenes of soldiers.

More akin to Basquiat, but also recalling abstract artists Sam Gilliam and Alma Thomas (who are not included here), Mark Bradford's “Whore in the Church House” (2006) is a good example of his brilliantly colored and slowly accretive method. At 8 1/2 by 12 ft., it commands the museum space with thousands of brush marks, layers and torn collaged elements. A relative newcomer at the time of the start of the show’s tour eight years ago, Bradford has since emerged as one of the most acclaimed artists in the world today.