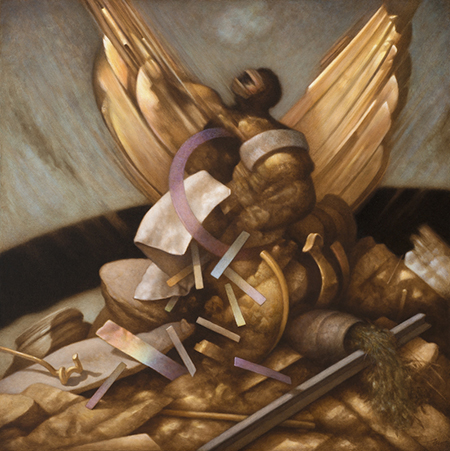 The more things stay the same, the more they change. Do you really experience time and space? Or do you simply experience change? The first whisker twitch says transformation is the soul and sole subject of painter Mark Spencer’s fine art, but like a cat in the night, these pluperfect paintings are about in-between places, and seek the same prey courted through the centuries by the great Romantics, Symbolists and Surrealists. Spencer, like those preceding him, finds his primary pleasure in the play of ambiguities. Classically trained at the Boston School of the Museum of Fine Arts, he brings a brilliantly hued and polished, Van Eyck-like technique to what could be described with equal accuracy as figurative naturalism or deep abstraction. Their feeling of turbulent transformation invites comparisons to Francis Bacon. The images are moving in multiple senses. A truly postmodern mind, Spencer has pondered humanity’s painterly past, and arrived at not only an utterly logical, but also highly dynamic and expressive synthesis.

Tossing it all into the maelstrom of mythical morphism produces images that hover just beyond the threshold of rationality. These are pictures of the mind’s innermost workings, the place in the imagination where the familiar coalesces and combines but never completely resolves. In "Blue Streak” the beautiful blue beam that arcs across the top of the canvas reads alternately as plasmatic light in a sci-fi fantasy, or a slow bend in a blue river across a warmly toned landscape background. The middle and foreground spaces are full of odd and partial objects, some blurred in rapid movement, some as still and frozen. Despite a wonderful play of shadow, light and cangiante, very few of these elements, which shape-shift into each other, are nameable in a fixed or final way. All prompt associations on a psychic level, suggesting helmets, or vessels, or anonymous figures. Spencer’s point is that there is no certainty, no ultimate reckoning, no permanent truth, just change and imagination. His ability to express this chaotic conundrum in such consummately finished pieces makes him one of Santa Fe’s best.