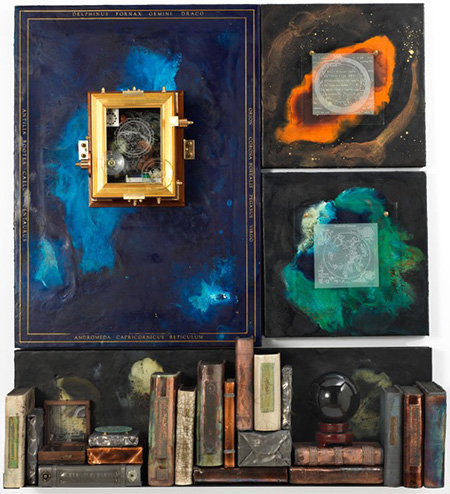 A major development in contemporary art during the 1980s and 1990s was the transition of craft-based artists to fine art status. The way this was achieved was by combining clay — or glass, wood, fiber or metals — with other materials — such as oil paint, photography or stone, — into large-scale, complicated assemblage sculptures. With better-known artists like Kiki Smith, Dale Chihuly and Josiah McElheny mixing blown glass with other, more conceptual devices, Seattle artists Dennis Evans and Nancy Mee turned to an older paradigm — Duchamp’s readymades — to reinforce the flexibility and adaptability of clay and glass, but without discarding craft’s — or the readymade’s — basic property: the look of usefulness or functionality.

Nearly 40 years on, husband-and-wife Evans and Mee are only now joining forces in a large body of work, “Prospero’s Library,” that is so beautiful and thought-provoking that one wonders if all their heretofore independently created works were comparable collaborations all along. Theirs is now a seamless creative stream.

In Evans’s case, the 69-year-old ex-altar boy and chemistry major at Seattle University switched to art at the University of Washington in 1965 and never looked back. Encounters with visiting Dutch art critic Jan van der Marck at UW exposed him to the Fluxus movement, as well as to nascent European postmodern icons, such as Piero Manzoni and Joseph Beuys, all of whom are reflected in his art.

With Mee, her personal readymade was the subject matter of feminist theory and the renewed discovery of photographic appropriation. These forged the 65-year-old’s obsession with women’s health and shifting views of the female figure in art. Transferring it all to photo-etched plate glass — think Venus de Milo in a back brace — Mee built copper orthopedic appliances that were as beautiful and enigmatic as any Picabia machine or Duchamp tool.

“Prospero’s Library” could be in a history of science museum. Besides explanatory labels, texts are painted, printed or engraved on each display, many of which consist of glass books on steel shelves; “specimens” of porcelain filled with gold in bronze vitrines; astronomical maps with intricate brass instruments. It's accompanied by a 72-page illustrated guide containing so much additional text that one could think Nabokov’s scholarly satire “Pale Fire” (1962) was also being recruited for the labyrinth of learned in-jokes.

Provided the viewer is willing and able, the experience of “Prospero’s Library” and its 30 or more “exhibits” becomes more than art, prodding us into thinking about all the Renaissance topics that Shakespeare’s protagonist, Prospero, contemplates during his 12-year exile on a desert island in “The Tempest” (1611). With exquisitely built astrolabes and glass and porcelain stacks of mock-books, Evans and Mee create their cultural response to the play, Shakespeare’s last.

“A Large Station of Constellations” seems like it could be Merlin’s own portable observatory. Here and in several other works, even the choice of materials becomes symbolic, i.e., lead, wax and ceramics were all prevalent in the 15th and 16th centuries. Porcelain was “invented” by a Bavarian alchemist in 1708 when he was seeking to heat lead to a sufficient temperature to turn it into gold. Craft materials, unlike oil paint, are tied to the history of science, Evans and Mee’s real obsession.

Examining the “Station for the Liberal Arts,” “Belief” and “Dark Matter,” we enter into a universe where most scientific claims of the period are unreliable because  they remained untested or unrefuted, just like art. As with alchemy and magic, where did science end and art begin? Some of the sculptures fall back on words too easily, while others depend upon the nonverbal power of the myriad objects’ presence: a toppling shelf of glass books; a copper-glazed textbook on particle physics; a deconstruction of the states of how one might “discover” gold — through the heating of clay that, instead of turning into gold as intended, turned into porcelain.

Reading the show can be a bit wearying, and, ultimately, Evans and Mee’s relentless insertion and overlay of text — poetry, definitions, quotations — becomes ornament or decoration, snowy filigree on a green-tinted plate of glass. When it is lightly scattered, like gold leaf, the words enter into the artists’ conspiracy more successfully. The sheer beauty of Mee’s see-through green glass books, as in “Book of Sensuality,” or Evans’s selecting poet Robert Graves’s 1948 book “The White Goddess” to symbolize the pre-Christian, pagan Mediterranean are both inspired and deeply serious, made all the more challenging and indelible because of the way they are conceived, constructed and flawlessly installed. Were they to be seen in a real art museum, one more layer of critique or secret satire would be revealed.