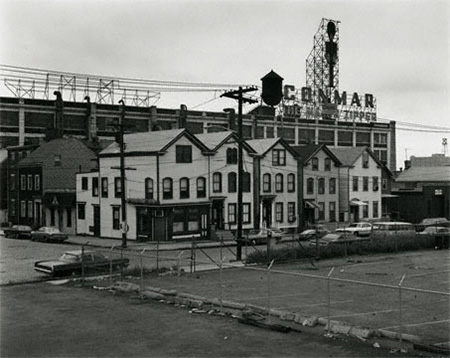 Doze off during the limo ride out of Newark airport and you heedlessly lose an opportunity to scan, one after another, living examples of the type of ordinary urban landscape in decline that inspires photographer George Tice to transform selected components of aging hometowns into arresting imagery.

A native of New Jersey, Tice has been so lauded and revered for the impeccable quality of his meticulously crafted black and white prints that other leading photographers, such as Edward Steichen, Lewis Hines and Edward Weston, turned to him to produce limited-edition portfolios of their own photographs.

Tice began working with large format cameras in the 1960s, crafting carefully toned and detailed prints such as those in his celebrated portrayal of traditional Amish and Shaker communities. By the 1970s, the photographer turned his attention to exploring elements of his home state of New Jersey.

This exhibition centers around a selection of 40 vintage 8 by 10 inch gelatin silver contact prints from the early period (1973-74) of Tice’s ongoing examination of aspects of the everyday structures and places that define the American cultural landscape. Those photographs, which formed the beginnings of the "Urban Landscapes" series that he worked on until 2000, play off larger works here, including a selection of Tice’s most revered images and more recent work from his extended New Jersey portrait.

Tice’s photographs of New Jersey in the early to mid 1970’s describe particular times and places. Like stage settings, they often hold traces of the lives lead by inhabitants of the towns represented. The artist insists that “It takes the passage of time before an image of a commonplace subject can be assessed. The great difficulty of what I attempt is seeing beyond the moment; the everydayness of life gets in the way of the eternal.”

In “Strand Theater, Keyport, NJ, 1973,” Tice centers his camera on a crown of stage lights meant to pull small town audiences into a local movie theater with promises to transport them into lives scripted to be more thrilling than those they currently lead. Tice’s “White Castle, Route #1, Rahway, NJ, 1973” delivers a similar pledge of “release from the ordinary” simply by tacking a few “royal” architectural features on to a very plain looking building where the product for sale is ordinary ice cream.

There is a suggestion of loneliness and disintegration built into many of Tice’s works. To examine that tendency further, compare Tice’s “Route #440 Overpass, Perth Amboy, 1973” with the mid-career photograph of a similar subject by Catherine Opie, “Untitled #40 (Freeways).”

As the decades pass, Tice’s observations continue to exhibit a sense of poignancy. Like any good documentary photography, they often take on the feel of stage settings on which traces of the lives led by the inhabitants pictured play out. “Jahos Brothers Clothing Store, Trenton. NJ, 1973” features half a dozen or so headless male mannequins decked out in the type of suits, dress shirts and ties that men in small towns have been wearing to weddings or funerals for decades. In contrast, the lines of laundry fluttering in “Tenement Rooftops, Hoboken, NJ, 1974,” flaunt the realities of daily life. Tice again excels in his ability to find and honor the commonplace while fusing an appreciation for beauty within the grittiness of ordinary life.