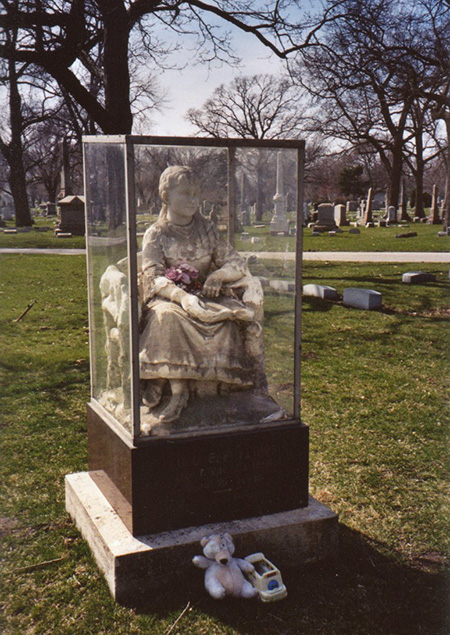 Not long ago I made the topic of spaces/places that I particularly enjoy the subject of one of these columns. In it I briefly noted baseball stadiums, bookstores/libraries, and then concentrated most fully on art museums. I’d like to extend that to a kind of ruminations part deux, and treat three other spaces/places that especially obsess me: cemeteries, airports and the churches of Rome.

I live close to the large and historic Rosehill Cemetery in Chicago, and I’ve driven up and down its narrow lanes once or twice a month for the last 25 years. It’s got a lot of things that interest me — sculpture, architectural forms (gothic, classical, Egyptian revival, art deco, etc.), landscape design of a very high order, a sprinkling of celebrity, Tiffany windows in the mausoleum, and lots and lots of, as they say, permanent Chicagoans. (Go ahead, check it out.).

Golf courses and cemeteries seem to me the height of modern urban landscape design; they’re not overused as much as city parks and are thoughtfully and pictorially laid out with specialized and curious functions. I don’t golf so, both here and in my travels, rather than teeing off I make a point of visiting local cemeteries. I don’t find them creepy or depressing, indeed I find interesting the degree to which they can be (as is the mausoleum at Rosehill) memento mori that reveal so much about our culture. Cemeteries soothe me, they represent a kind of democracy in action, all their residents having converged to the same state, all remembered and honored by those they left behind. I have further made a slight fetish of visiting celebrated artists’ graves, and have to fight the impulse of saluting and engaging in the cliché of thanking them for their service to our culture.

Airports too, though a quick disclaimer, I feel nothing of the following about my own local airport. To me O’Hare is just a glorified bus terminal, a point of embarkation I experience so repeatedly that I don’t experience it at all, the magic of it drained by overuse. But my heart skips a beat when I find I have a two-hour layover in, say, Pittsburgh or Frankfurt or Denver. Even knowing I have three hours between planes in Cincinnati makes my eyes sparkle. I enjoy strolling about the terminal, grabbing a bite at one of the restaurants that claims to represent local cuisine, going through the bookstore looking for a publication on local architecture, etc. I like to sit in a terminal and just watch the endless streams of travellers parading past me in both directions, speculating about them, wondering if they, like me, are caught in some temporal limbo, stuck between here and there for a bit, with home or a destination at the end of our pleasant purgatory. Airports too, more and more, often have a lot of local contemporary art scattered about, and while it can be difficult to get information I have seen some wonderful things in unexpected places. In a way, an airport is the obverse of a cemetery, bustling with life, completely transient. I decided a long time ago that airports for me would not be something to endure, but to enjoy. Even when that disembodied voice intones: “the flight to Chicago has been delayed two hours because of weather and traffic problems at O’Hare” I try to see it as a gift.

And then there are the churches of Rome. I’m lucky enough to get to visit Rome every other year for about ten days with some terrific colleagues and SAIC students, and have been poking around that historic city on and off since I was a grad student. All cities have wonderful houses of worship and they, like airports and cemeteries, can function as oases, places that are part of yet apart from the urban stream of life. What makes Roman churches so special is that, starting with St. Peters Cathedral, no expense was spared in their creation and decoration. In most cases they are visually internally consistent. By this I mean that unlike, say, in Florence or Venice where a church could be medieval and then decorated and redecorated over the centuries, so one chapel might have a Renaissance altarpiece beneath a Gothic fresco with some Baroque tombs on the side walls, that happens less often in Rome. Sant’Andrea della Valle, for example, is entirely Baroque: designed, built, frescoed and decorated in the 17th Century. It is a consistent work of art that makes a coherent statement that provides a time-warp into another epoch.

There are so many Roman churches that it is impossible to visit them all, Many times I've spent an hour or two getting to a Roman church that I’ve never visited only to find it locked with no signage advising visitors when they might return. Even minor churches can contain original artwork by the likes of Raphael, Michelangelo, Bernini, Caravaggio, Rubens, etc. It is haunting to visit a church like S. Prassede, built in the 9th Century (and by no means the oldest church in Rome) and the site of continuous worship ever since, to look at mosaics your predecessors have looked at for 1200 years. On each visit to Rome I try to visit a church I’ve never seen before. For my next trip in 2017 I’ve selected St. Paul’s, which is actually a 19th Century church with much of its decoration by English artists such as William Morris and Edward Burne-Jones. I figure if, once every two years, I make it to a church in Rome I haven’t visited yet I’ll only have to live until I’m 138 to visit them all.  Can’t wait!