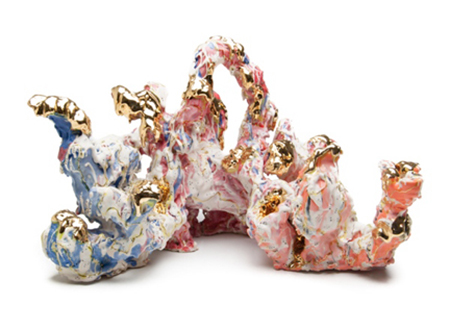 Over the past three decades art fairs have come and gone in Seattle, but one hopes the second annual Seattle Art Fair recently concluded at CenturyLink Field Event Center, will return and stay. Underwritten by Microsoft co-founder Paul Allen’s Vulcan, Inc., this was the best Seattle art fair ever in terms of quality, attendance and national and international gallery representation. Without rehashing a day-to-day account (I went every day), it makes sense to concentrate on one area, galleries exhibiting ceramics, to gauge the status of the medium and field-test the artists who appeared. It matters because this was an art, not craft, fair and all the clay artists were but players on the stage among the painters, printmakers, photographers and other sculptors. Ceramics held its own.

Convinced enthusiasts like myself and others were impressed and glad to see new faces who had made it out of the ghetto of glittering pot shops that pass as galleries and into blue-chip spaces as far flung as Tokyo, Chicago, Los Angeles, New York and Vancouver, BC. Thirteen galleries out of the 84 who had booths showed clay. Surprisingly to Seattleites, only three galleries, Marlborough (Dale Chihuly), Nancy Hoffman (Nicolas Africano) and Claire Oliver (Beth Lipman) showed glass, a very important signal in this glass-inundated city.

Because it has thrived in an academic, university-based hothouse of instruction and exhibitions for years, two canons have emerged.  There is the ceramic-world elite of artists and medium-specific dealers like Garth Clark posited years ago. Second are those more recently determined by the wider taste of mid- and high-level mainstream fine art dealers — and the art museum curators who love them. Thus, erstwhile titans like Robert Arneson, Peter Voulkos, Viola Frey and Adrian Saxe were nowhere to be seen, while relative unknowns like Joakim Ojanen (Richard Heller), Andrew Costa (Winston Wächter) and Jesse Small (Nancy Hoffman) shone brightly. Patti Warashina (Abmeyer+Wood) was the only clay-world big name on view, her new work shrewdly combining blown glass and molded porcelain heads.

Among other figurative ceramists, distorted, crudely built heads by Ojanen, Alexander Rohrig (Gale Severn) and Rebecca Morgan (Juxtapoz) were contrasted with the dramatic, dreamlike realism of Christopher David White (Abmeyer+Wood), which is less folksy or childlike than the others. A dozen or more seated figures by Wanxin Zhang (Catherine Clark) seemed more appealing in groups, as in a small temple shrine, than the normally more monumental, isolated versions.

The Shigaraki, Japan collective, Otani Workshop, made a strong showing of pedestal- and floor-based installations in the Kiki booth and at “Superflat X Juxtapoz,” a pendant exhibition at another Vulcan space, Pivot, a rotating-show area in the storefront level of the imposing new Allen Brain Institute. Curated by Japanese superstar Takashi Murakami, the inclusion of the Otani Workshop was inspired. A long reclining “Poseidon” figure, built, assembled and fired in parts, stood out. Abstracted hand-built vessels by Yuji Ueda and Kazunori Hamana were gripping in their vitality and spontaneity. They contrasted brilliantly with some of the more slick-surfaced, colorful ceramics back at the main hall.

Brandon Tang (Gallery Jones) and Laurent Craste (Back Gallery Project), both Canadians, are indebted to the great clay-world guru in Montreal, Léopold L. Foulem (not seen here), who pioneered their approach to mismatched teapot assemblage and zany takes on found-thrift-shop junk. The two Vancouver artists were the only ones who alluded closely to the recent history of mass-produced ceramic tableware and its implications.

There was also a “Watermelon” by Ai Wei Wei (David Benrimon). Unsold at $225,000, it marked some kind of record for ceramics at art fairs. Other prices, from $1,500 to $20,000 and upwards, were sharp signifiers of the hidden hierarchy in contemporary American ceramics. With no inflationary reassurances like those of the 1980s fueling high-toned “gallery vessels” dotting art galleries back then, prices now reflect slower, more reliable career growth. The age of husband-and-wife teapot collectors or the obsessive, neo-Meissen bachelor collector is over, replaced by, at least in the case of Seattle Art Fair, prospective buyers who know little, earn a lot, and are willing to learn by looking. They don't really care about a parallel ceramics canon that always rang hollow.