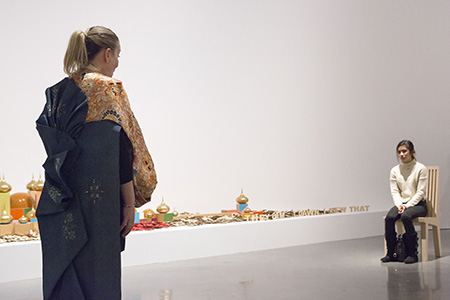 As an equal-opportunity lover of the visual and performing arts, I’m struck by the widening chasm of ethos between the two. This hit home recently when I visited two exhibitions during my stay in Australia, one in Perth, the other in Sydney. “Hatched: National Graduate Show” at the Perth Institute of Contemporary Arts showed all too well how the decades-long entrenchment of deconstruction in the academy has inexorably led to a disconnect between artists and viewers. Showcasing artworks of recent graduates from 23 art schools across Australia, the show had the identical stylistic and conceptual fingerprint of any comparable show one could see in New York, Los Angeles, Berlin or London. That’s not necessarily a compliment.

Art schools around Australia, the United States and the world are churning out automatons programmed to deconstruct familiar leitmotifs, shuffle them around, then recontextualize them, presumably so that viewers will reconsider them in a new light. But by divorcing the art object from context, artists frequently leave viewers without any intellectual handholds and footholds to grasp. Curatorial statements and museum wall texts tend to obfuscate rather than elucidate artists’ intent, steeped as they are in the mumbo jumbo that has made “artspeak” a four-letter word.

This was painfully evident in the works exhibited in “Hatched...” For her series, “Please Touch,” Emmaline Zanelli photographed body parts seemingly emerging from the wall or from pieces of fabric — presumably to shake up our ideas about the body. Aaron Hoffman’s inscrutable sculptural objects included a glass vase smeared with callouses the artist had shaved off his feet. “The destabilized materiality of the skin,” the wall text explained, “suggests that presence has been undermined, and absence has become activated.” Laetitia Olivier-Gargano’s sculptures combined incongruous elements: toothpaste with hair sticking out of it; and a coffee cup with peanut butter on the rim, human teeth seemingly growing out of the peanut butter. Then there was Eugene Choi’s “Body Scaffold (Tesseract),” a metal cube housing four video monitors, each showing part of a woman’s body in awkward, straining poses. Apart from the old magician’s trick of sawing a woman in half, you couldn’t create a more straightforward demonstration of hacking something familiar apart and rendering it grotesque.

These rote iterations of the same trope — deconstruction and decontextualization — played like an eleventh-generation cassette dub of a 1980s-era Derrida lecture. There is no profundity inherent in the sophomoric chopping-up and reshuffling of arbitrary visual iconography. By propagating such strategies, artists and the schools that spawn them further alienate viewers already leery of contemporary art; not to mention separating young artists from critical or conceptual thinking as the requisite core of good art.

Interestingly, some of the most engaging art being made today is not grounded in the syntax of deconstruction and pastiche, but in the traditions of narrative, meaning, and integration — ideas found far more often these days in the performing arts than in the purely visual, particularly in dance and in classical music [See Speer's commentary last month about Shahryar Nashat’s “Parade”—Ed.]. Which brings me to the exhibition at the Sydney Museum of Contemporary Art.  In “Telling Tales: Excursions in Narrative Form,” Lee Mingwei showed how a moment of conceptual disconnect and disorientation can engage rather than confound the viewer’s senses. In “Sonic Blossom,” a piece that the artist calls a “living sculpture,” a classically trained opera singer wanders the museum, inviting a random viewer to sit in a chair designed by Mingwei. Then the singer performs a selection of five songs by Franz Schubert directly to the seated viewer. We could quibble that the one-on-one conceit of the piece is derivative of Marina Abramović’s 2010 stare-fest, “The Artist is Present.” But no one was quibbling in Sydney as soprano Ayse Gӧknur Shanal’s sumptuous voice and Schubert’s deeply affecting music bloomed into the galleries. The seated viewer and dozens of bystanders stood rapt and stunned, disoriented at the intrusion of the vocal arts into the bastion of the visual. In a museum brimming with cookie-cutter postmodern redux, the elemental, decidedly pre-modern power of lungs, vocal cords and melody, so unexpected and out-of-context, had brought about pleasure, frisson, catharsis. More visual artists should take a page from Mingwei’s playbook.