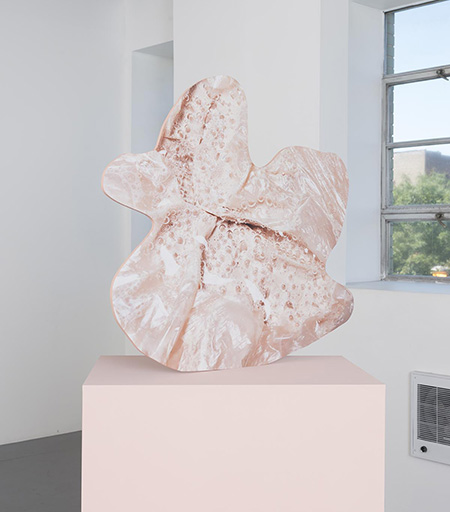 James Collins, Rachel de Joode and Alwin Lay are practitioners of different genres: painting, sculpture and video, respectively. Despite their differences in media, the stylistic and conceptual similarities among the three artists are potent: slick representation, confounding visual effects, and a palpable sense of remove between the viewer and the artists’ subject matters.

In his video, “Blauer Würfel — Blue Cube,” Cologne-based artist Lay presents a 10-minute, stationary shot of blue dish soap pouring from an inverted spout onto a narrow, white pedestal. During minute one, the soap quickly spreads over the pedestal’s surface. Instead of running down the sides as it flows out to the edge, the soap starts building upwards. Over the next five minutes, it becomes apparent that the liquid soap is filling an invisible container, progressing at an almost imperceptible pace, until the stream of soap depletes into a drip. From such a simple gesture, Lay has procured a multitude of cinematic, narrative and emotive characteristics: tension, surprise, cadence, realization and eventual conclusion.

Berlin-based de Joode also works with viscous material as subject. Neither completely two-dimensional nor three-dimensional, her pieces “Contiguity I" and “Contiguity II” are a novel meeting of photography and sculpture. Here, PVC board is precision cut into the forms of seemingly-random spills. Adhered to either side of the board are close-up images of runny, bubbly liquid, filling the “puddles” from edge to edge. In de Joode’s 2-D digital prints, images of hands are enveloped in slippery, wet clay, not in engaged in the creation of ceramic objects, but merely illustrating the material properties. Capturing these flowing, malleable matter as images is presenting them within a contradictory dichotomy: perpetually fluid and irreversibly frozen.

Tyvek, a high density polyurethane product used in envelopes and in housing construction, provides the support for Collins' trompe l'oeil painting. The original context of this material is undeniably loaded, but in Collins’ work, the functional reference is literally and figuratively pushed to the background. Instead, the emphasis is on the blue-and-white lines painted on top of the Tyvek, hand-rendered to produce illusionistic folds and waves that produce a dizzying optical effect.

So often, when artists make work about the physical properties of material, the viewer is presented with something direct, bodily and tactile. The artists in “What Birds Can See,” on the other hand, have dissected their subject matter, locating and representing certain attributes with pointed purpose and aesthetic restraint. Through this kind of intellectual distance, Collins, de Joode and Lay create works that are not so much about what a material feels like, as what it does, what it means and how we understand it.