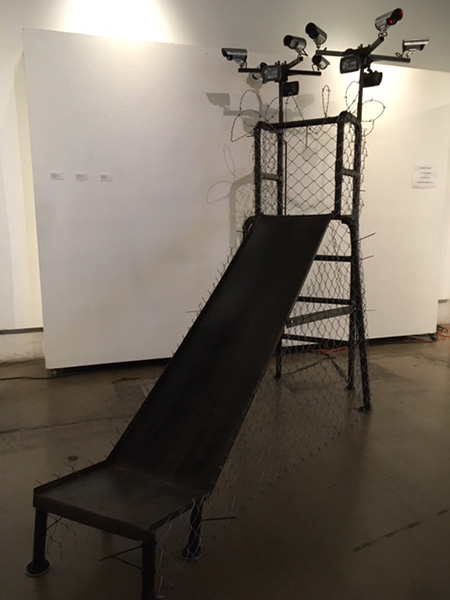 The new breed of artists concerned with immigration and U.S.-Mexico border issues continues to grow, stirring the dialogue in innovative ways. Texas-based Angel Cabrales joins the fray with the solo exhibition “Delineation,” which exploits gun imagery in several mixed media pieces and then turns to childhood innocence in a playground-type installation called "Juegos Frontiers" (Border Games). The latter piece, incorporating an actual playground slide and four other pieces of equipment, is the more provocative.

In an artist’s statement, Cabrales says he was struck by the arbitrariness of a border wall while revisiting a play area along the Texas line that he remembers as a child. For “Juegos Fronteras” he’s stretched chainlink fencing and barbed wire over the equipment and topped the pieces with floodlights and security cameras, creating a sense of danger and forbidden places. Today's border security, as Cabrales sees it, not only affects the free flow of cultures, but it quells childhood freedoms as embodied in a playground. Satirically, he gives the equipment names like “Merry Go Round Port of Entry” and “See Distrust Saw Subjugation.”

The walls next to the installation feature Cabrales’ “Gun Splatter” series, in which facsimiles of handguns and rifles jut out from black splatters on the canvas. A viewer could see the guns as melting into the black “goo” or emerging from it, perhaps depending on their degree of cynicism regarding our country’s border tensions, gun-rights debates and general political climate.