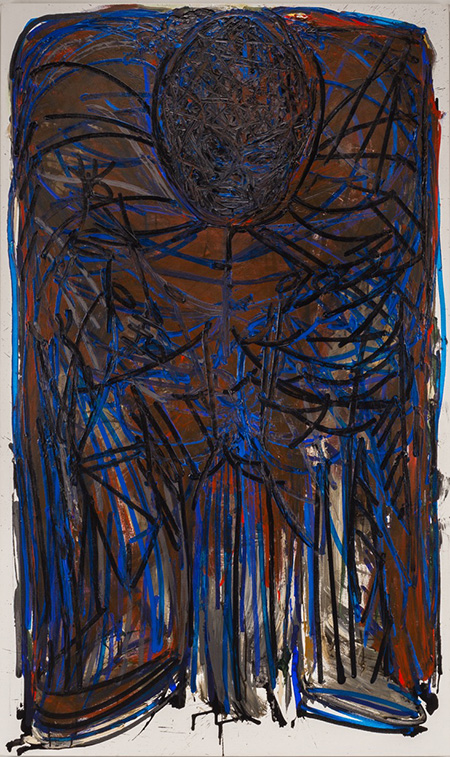 When you are a person of color in certain parts of the world, your body becomes an object that causes people discomfort. When you are an artist of color, you have to reconcile that reality with your creative practice. Multi-disciplinary artist Victor Maldonado first started migrating between the U.S. and Mexico with his family when he was a month old. At the age of five he started working in the fields picking fruit along with them. Blind to the arbitrary nature of borders, he didn’t know that he was traveling between two countries or between two cultures. “I thought it was all California,” he muses. When his family settled in the U.S. and Maldonado later attended art school, it became a different kind of reckoning: “The scariest thing for me for a long time was to be defined by stereotypical terms. I wanted to prove to myself that it wasn’t true. But it is.”

During a Ford Family Foundation-sponsored residency at Crow's Shadow in 2014, Maldonado began to embrace and mine the symbol of the lucha libre, the masked wrestler, as a way to claim his Mexican identity. The title of his most recent series of paintings, "Old Ways," refers to a return, both to the iconography that he rejected for so long and to a more intuitive way of working.

The first canvases you see upon entering the gallery are large and assertive, with line work that resembles the leading in stained glass. In “El Gran Demonio” an abstracted luchador, rendered in bright blue and red hues, kneels like Atlas, his head bowed, his broad shoulders appearing to hold up the canvas, waiting for the weight of the world. The palette and perspective of “El Diablo Norteño” is dramatically different. A sunset-yellow-and-orange luchador strains against inversion, his face pressed into a mat that isn’t there. The third large-scale piece, "El Monstro Cumelon," is drained of color and, save for a hint of a mask at the top of the composition, the figure is lost to abstraction.

As the series progresses, Maldonado draws out this abstraction to the point that only a whisper of the domed line of the mask remains. There is an echo of the luchador in every piece, but the image becomes more and more deconstructed, more and more obscured. Triangles replace the rounds of eyes, geometry stands in for organic form. Maldonado calls it “anti-racist abstract expressionism” and says, “I don’t need to reinforce the mask iconography anymore, but I can use it as a frame.”

Maldonado, who makes his home in Portland, created the series as a reflection of how invisible the people of color feel in the Northwest. “I’ve done a lot of grappling, without role models and feeling very alone.” There isn’t a well-worn track for Mexican American artists or for any artists of color. “Can I tell you why there aren’t that many people of color in the art world?” Maldonado asks rhetorically. “It’s because they’re using all of their creative energy to survive.” Maldonado has turned his lack of mentorship into a mandate to provide mentorship for his students at Pacific Northwest College of Art (PNCA), where in addition to teaching he also serves as inclusions specialist and assistant dean. (In passing he says, “I wasn’t supposed to be an assistant dean. I was supposed to be in prison or dead from working in the fields.”) And he has turned his feeling of isolation into art-based outreach.

Complementing "Old Ways" is a social media practice that takes Maldonado into the community wearing his blue and silver luchador mask as a character he has dubbed Mad Mex. On Maldonado’s Instagram feed, Mad Mex poses with his arm around outdoor sculptures, he attends art shows, he sits in a cafe being interviewed by an arts writer. Maldonado’s practice is to don the mask in public and to ask strangers to take a photo of him in it. “People feel safe with Mad Mex in a way that they don’t in the presence of a Black Lives Matter protest.” Ironically, by taking on the caricature of a stereotype, it comforts people of the dominant culture in a way that the artist’s body alone could not. The mask serves as an object of attention, allowing for a fuller conversation about race.

During his exhibition Maldonado does a performative work in which Mad Mex will lie still on the gallery floor for hours. “It’s bad enough to be Mexican,” he says, “you can’t also do nothing. Doing nothing is the worst thing you can do as an artist of color. So I’m trying to do nothing as much as possible.” In doing so he challenges our prejudices and our ignorance while wearing a symbol of them.

Another layer to the Mad Mex project is a series of photos, not of Maldonado wearing the mask, but taken by Maldonado from behind the mask — another way that he uses it as a frame. The artist shows us the world as he sees it, the landscape defined through two eye holes, one nose hole, and a mouth hole. He always leaves the inside of the mask visible, the sweat-stained leather as close as we can get to being inside another person’s skin.

The artist reveals that the most abstracted pieces in "Old Ways" are in fact representative of “the psychological space inside of the mask.” If you re-examine the work in light of this information, you notice that although the form of the fighter is not present in the colorfully and violently deconstructed canvases, they seem to have the most fight in them. Maldonado understands that sometimes we must fight in order to be free. That we must fight for our authentic selves. That we must fight not to be invisible. The power of Maldonado’s voice is that it speaks to the fight in all of us.