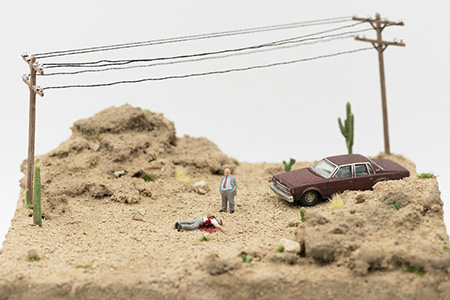 Mea culpa, Latin for “my fault,” makes an interestingly confessional title for this exhibition of thirty-one tiny dioramas, set within Plexiglas vitrines or domes, made from HO-scale model-railroad plastic figures [“HO” is the most common scale of model railroads for hobbyists according to the National Model Railroad Assocaition—Ed.]. Modified by the artist, these are miniaturized acts of murder and mayhem. The Washington-based artist, Abigail Goldman, worked as a crime reporter and an investigator, so we may presume that she’ knows her way around the forensic nastiness that she replicates here. Her tiny actors, some reduced to what Francis Bacon referred to as “what you have on your plate,” with others enjoying the process of food preparation amid suburban ranch houses, Airstream trailers, and various cars and trucks, it’s the banal, ubiquitous stuff of American suburbia. Of course, the smiling normalcy we’re taught to find in the familiar collapses easily into farce and grotesquerie, as Hitchcock, Lynch and the Coens have demonstrated in their films for decades. I recommend that you read Mitchell Lesy’s "Wisconsin Death Trip" to consider Fargo-like dark doings of the nineteenth century.

Goldman’s tiny slices of life and death are perversely charming, the delicate scale mitigating the horror of the ghastly proceedings. In “Blind Date,” a couple embraces at the front door of a picket-fenced house, while the open trunk of the car parked in the driveway reveals a bloody corpse. Perhaps a previous date with the wrong chemistry? “Problem Solver” presents a desert landscape replete with cactus and telephone poles, the desolate scene of a murder and the dilemma of body disposal. “Rent Control” depicts a row of four Victorian homes, San-Francisco-gingerbread-style, apparently based on the postcard-perfect tourist magnet, the Painted Ladies. A body lies messily on the sidewalk, unnoticed, while the residents ponder other business — maybe making the monthly rent. “Tread Water” depicts the folly of ocean swimming in the wrong waters at the wrong time. Last word to Goldman: “Today, there’s an anger buzzing just under the surface ... By condensing rage, miniaturizing it, making violence preposterous and humorous — maybe there’s some relief.”