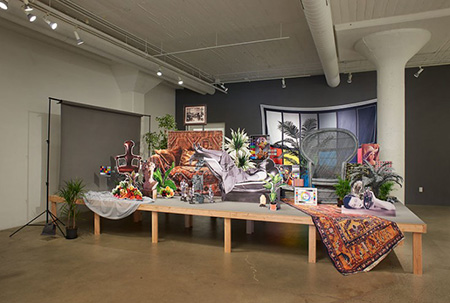 Through video, a large-scale installation (it occupies one of the two exhibition spaces), floor works, photography and large wall-hung textiles, Stephanie Syjuco explores costume, colonialism, portraiture, consumerism, and trade. A common thread throughout is references to the printing process–through the use of a test prints, like those seen in newspapers or created by your home printer — in color as well as in black and white — as well as to printing itself. Much of the show features printed materials standing in for the real thing, copies that mimic the original, but in ways slightly off.

The show begins with four excellent photographs of the artist posed in a native-looking costume; they set a strong tone for the rest of the exhibition, in which similar themes are expressed. In these staged studio portraits, all of the clothing and background are black and white, with stripes, patterns, and zig-zags aplenty: it is a cacophony of optical input.

A quick inspection reveals price tags on the clothes from big-box clothing stores (e.g., Forever 21, Target, Urban Outfitters, and the like; where the artist paid for the items with a credit card, and then returned them immediately after the photo shoot). These images are all part of Syjuco’s “Cargo Cult” series. The shots highlight the false impression photography can create; they present an image that isn’t what you first believe it to be, but rather a reflection of a fashion conscious interest in tribal patterns. This made me reflects how imperial-age colonizers presented their efforts as “helping the uncivilized,” all the while destroying indigenous culture, people and land, for the sake of their own profit. Here we see a 21st century co-opting of the cultures of others for profit and fashion. The fact that these outfits were likely made by people in formerly colonized countries, for, no doubt, low wages, adds resonance to the work.

The artist smartly blends past and present, and does so through a wide variety of media that expands as you move through the show. Syjuco melds traditional culture and world history with modern technology in creative and unique ways to explore interactions of culture, economy, commerce and the international power structure.