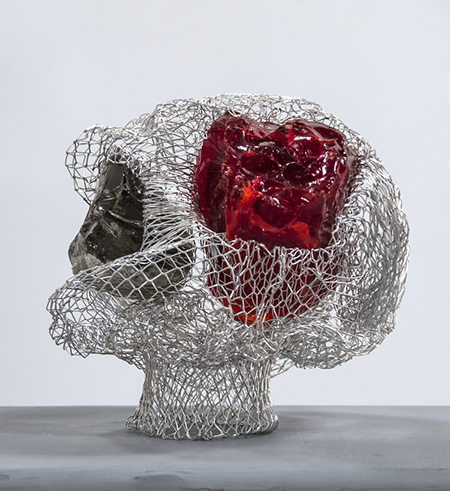 Shirley Tse is a Los Angeles based sculptor well known for her floor and wall pieces made from polystyrene and plastic. In earlier works she was concerned with the inherent properties of her materials, their malleability and their plasticity as signifiers. These pieces explored ideas of fluidity, often addressing social and political issues of transport, migration and waste associated with packing materials like styrofoam and bubblewrap.

In her latest installation, "Lift Me Up So I Can See Better," Tse uses a children's story, "The Happy Prince," written in 1888 by Oscar Wilde, as a point of departure. The elements coalesced for Tse when she happened upon a trove of different colored glass chunks from the estate of the late artist Miriam Wosk. These irregularly shaped pieces of glass reminded her of the prince's jewels and became the anchor for this exhibition. While Tse's work alludes to Wilde's story, it is far from a didactic illustration. In this tragic fable about generosity and suffering, a statue of a prince is placed high on a column outside the palace, magically allowing him to see the suffering in the town below as he never did before. Ashamed by his unawareness of the misery in the city, he uses the jewels and gold that adorn his statue to help the town. But when stripped of its beauty, the statue is neglected by the townspeople and ultimately left in ruin.

In her installation, Tse divides the gallery into implicit visual registers of high and low. A set of bleachers three rows high placed across the gallery serve as the pedestal for Tse's "Vehicle Series," wire-mesh head-shaped sculptures with bulbous shaped glass eyes. The irregular-shaped pieces of colored glass give the heads an alien aura. Tse often leaves the mesh structure exposed, furthering the idea that these are disembodied spectators.

The heads are juxtaposed with a cluster of quasi-figurative sculptures mounted to a wide array of stands that extend vertically toward the gallery's ceiling. Perched atop found and self-fashioned tripods (light, music and telescope stands) are an assortment of funky figures and hard to identify, handcrafted objects that seem to have some relationship to scientific research. Thinking about the quasi-figurative works in relation to Wilde's story, they become representations of the prince and his statue in various states of life and death.

"Happy Prince,” the tallest sculpture in the exhibition, is mounted on an extended light stand. His modeled body is purposely crude, with a skin-like surface of white plaster. He is unadorned except for large ruby colored glass objects that read as eyes. On his shoulder sits a swallow, a trusted friend and symbol of hope in the story. 'Happy Prince" is seen in contrast to a work in a darkened corner of the gallery where Tse has transformed both the prince and the swallow into empty discarded carcasses.

"Lift Me Up So I Can See Better" simultaneously presents the hopeful and despondent. The pieces are of and about the body, but in Tse's hands the body is both human and machine. It is sterile and tactile, whole and fragmented, dead and alive. The installation conveys that it is possible to transcend barriers and see things differently, as did the prince when confronted with the plight of the townspeople, although in the story of the Happy Prince this generosity led to the statue’s dismantling. Tse explores these different perspectives while creating elegantly quirky objects that speak toward the possibilities of change as well as the dangers of class and cultural separation.

Though not known for her works on paper, Tse's sculptures are accompanied by a lovely limited edition artist’s book, produced in collaboration with the French writer Michel Butor and published by Gervais Jassaud. In “J...," Tse interprets Butor's poetic texts on separate pages, adding evocative fragments in the form of two- and three-dimensional collages.