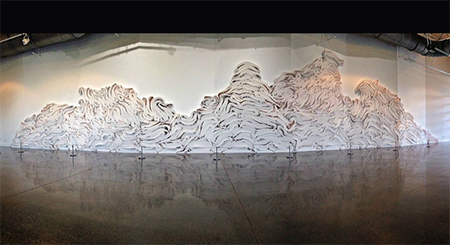 What began as huge rolls of recycled Kraft paper ended up on the walls and floors, transforming an austere, concrete gallery into an environment evocative of churning waves, melting glaciers and massive mountains. Korean-born Japanese artist Jae Ko describes herself as “obsessed with paper,” and for this show, entitled Flow (流 in Japanese), she literally uses a ton of it. Ko has been working with paper for nearly two decades, and the current series, “Force of Nature,” is inspired by her travels across North America. It began with a similar installation in 2010 at the Phillips Collection in Washington, D.C., where she lives and works. At Grounds for Sculpture in New Jersey earlier this year, another of her massive paper installations was titled “Shiro," which means white, pure and clear. Like that show, the CAMH show was inspired by trips to the far north, where Ko saw mountains and glaciers. She manipulated massive quantities of white paper to evoke the mountains of melting ice that threaten to change life on earth forever.

Ko’s sculptural reliefs are created from unspooled and re-spooled paper that is manipulated to fit the gallery. Some pieces are stacked against the wall, reaching up and over a ledge as though trying to escape through the narrow windows (the gallery is mostly below ground level). Others spill onto the floor so that the viewer gets a perspective that suggests mountains rising from the tundra. Ko and her team worked on the installation for 10 days before the opening, and guests were able to see the work as it progressed.

To manipulate the numerous rolls of paper that comprise her work, Ko invented a table with two modified potter’s wheels that allow her to unroll and reroll the paper loosely, creating spaces between the looped paper that resemble concentric lines. She then moves the rerolled paper to the floor, where she can manipulate and shape it. Ko explains. “The edges of the paper create the lines. These lines are my drawings, and you can change them so they become moving drawings.” After playing with them on the floor, she attaches them to the wall with brackets (carefully hidden from view) and continues to shape the paper to create three-dimensional patterns.

For nearly two decades Ko has been working in fiber. She began experimenting with paper early in her career, taking a roll of paper to the ocean, burying it in the sand and recovering it several hours later to see the effects of the interaction. Ko also created an elegy for her deceased father by placing a large roll of paper in the sand and exposing it to the waves of the ocean. Her monumental installations evoke a wealth of allusions, from topographic models of mountains to tree rings to book pages. They also suggest Battenburg lace, its oval loops connected by delicate interwoven threads, and ribbon candy, its flat strips folded back and forth.

Ko studied graphic and commercial design in Japan, and worked as a designer, but her love of paper enticed her to begin making art. Earlier wall pieces were constructed from rolls of adding-machine paper, black ink and glue, the same materials used in Asian brush painting. Ko’s more recent pieces reflect her deep love of the landscape. Her massive nature-inspired installations are sinuous and seductive, as well as visceral and biomorphic. The tension in the curved forms mirrors the energy required to manipulate the paper and leads to these endlessly fascinating environments.