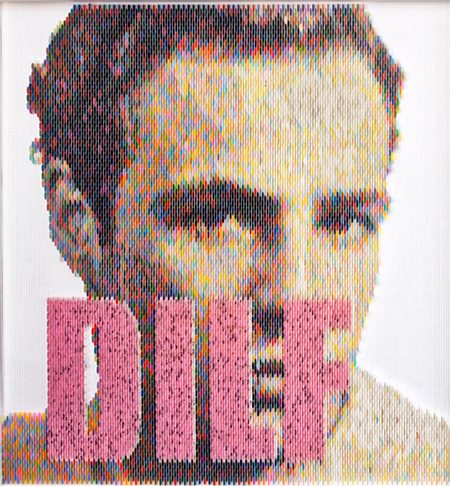 The patriotic title notwithstanding, Peter Combe’s "Stars and Stripes" is less about the impending Independence Day holiday, or the sci-fi-film sequel, than the mysteries of appearance and representation. So what better subjects than the film stars of the 1960s and the Op Art and hard-edge abstraction of the same period? If this sounds like yet another postmodern-PC critique of celebrity culture and formalism, the tools of devilish global capitalism, be advised: they’re delightful and ingenious contrivances that call into question the nature of vision as well: they’re art-as-philosophy, without tears.

Combe’s medium- to large-size assemblages may read as paintings, but  they’re also kinetic artworks that change slightly as the viewer moves, somewhat like lenticular photographs. The studio glamour head shots of Grace Kelly, Liz Taylor, Rock Hudson, Marlon Brando, Richard Burton, Tyrone Power and Dirk Bogarde appear from a distance to be shimmering, yet semi-ironic homages, á là Warhol, especially when partially obscured by large red block letters spelling out DICK, POWER, and DILF. Approach further, however, and the works become mysterious, phantasmic. Combe: “There is a magic that occurs, a trick of the eye where color seems to occupy space — a void — at once ethereal, yet seen from another angle the whole appears as if a ghostly image, veiled in gossamer.”

The magic derives from an unlikely source: Behr paint color samples, in a palette of 1,100 tones and colors, punched into ¾” circles, which are then inserted at a 45-degree angle into precisely cut slots in a polyester matrix, forming a fishscale-like surface inspired by the printed patterns of a security envelope. The color is brightest when viewed from 45 degrees to the right of center, where the halation of reflected light maximizes the saturation of the color chips. As with the pointillist Georges Seurat or the grid-based portraitist Chuck Close, Combe’s palette is more vivid than the facial pinks and tans one would expect; from a distance, the oranges, blues and greens that one associates more with landscape than portraits merge into verisimilitude. View the portraits from left of center, up close, and you can read the  print: color names and mixing recipes. Lighting is important to these ingenious apparitions. Combe again: “While working on these pieces, my favorite time of day is gloaming [twilight—Ed.]; it is at that time that the colours seem to come alive subtly, yet rather dramatically at the same time.”

The stripe and zigzag abstractions, made from multicolored paillettes, disks of iridescent fabric rather like giant sequins, which are used in the fashion industry, change color likewise, as the viewer moves, suggesting a merger of the abstract, dizzying art of Op pioneer Bridget Riley and kinetic sculptor Jesus Rafael Soto. Like the “Stars" portraits, the “Stripes" radiate color and light. but also retract; they exhale and, unlike politicians of a certain stripe, also inhale.