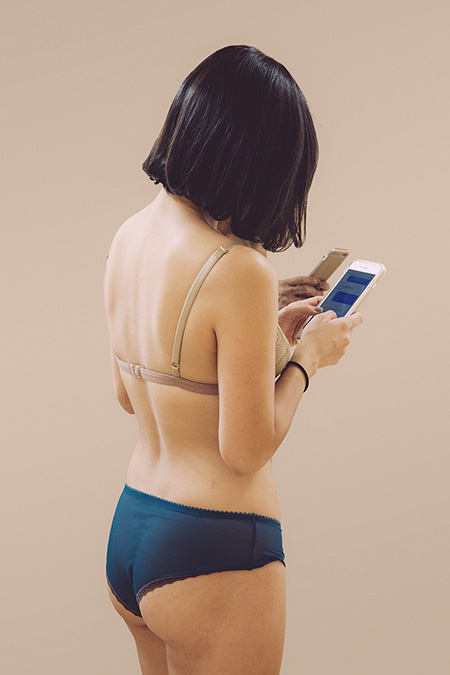 Jana Cruder, still from “The Way of Modern Man,” 2016, photograph from video

How far we’ve come since the first Homo sapiens grunted and then hesitatingly formed words to communicate with one another! The spoken word eventually led to writing, printing, recording, broadcasting and finally to today’s multi-media environment, with so many different methods of conversing. The latter is the message of “Text,” an off-the-grid exhibition exploring the ways we use the written, printed, spoken, sung and texted word.

If texting seems to be a curt, unemotional, cryptic way to communicate, Jana Cruder’s “The Way of Modern Man” performance piece dispels this perception. Comprised of four five-minute videos of unclothed individuals texting from their phones, and of a dozen stills of these and other people looking at their phones, this installation plumbs human emotions. Each split screen video is made up of a person texting, as she/he gradually undresses completely. The other side of the video displays the words that the person is texting. Off screen, the artist is texting provocative questions to each person. In each case, what begins as a casual conversation morphs into a confessional with a variety of intimate topics discussed, including self-identity, physical identity, insecurity, voyeurism, sexual violations and race relations. Observing the texted words alongside the unclothed person, and especially the element of his or her body language, makes us part of a circle of intimacy.

Gary Ward’s use of language is more traditional; it is entirely hand-written onto large sheets of paper. Each of his dozen works are composed of words randomly drawn with charcoal and oil sticks; and of images made up of acrylic paint, tape and other collaged materials, all of which draw on the Surrealist technique of automatism. The primitive, image filled artworks, mined from the artist’s subconscious, are intended to speak to the viewer’s inner psyche. Stylistically evocative of Jean Michel Basquiat’s paintings, one such includes a semi-abstract male head with the words, “COME ON BABBY SPEND THE NIGHT WITH ME.” Another drawing, also of a male head, includes the text, “I am waiting to see GOD on television.” A third piece reads, “Tri One Trick Pony Pony,” with part of the final “Y” cropped.

Extending the creative aspects of language yet further, L.A. based artist, musician, actor and filmmaker Morgan Sorne contributes a multi-faceted installation. It combines a large chalk drawing covering part of a gallery wall and floor with his own made-up language. The latter is both embedded as a written language into the drawing, and on specific performance occasions, sung by him in four octaves. The artist re-creates this primal singing performance, with more original drawings, in various L.A. locations throughout July. The dates and times of these performances — at the L.A. River, in a tunnel under a bridge, in an alleyway and in Skid Row — can be obtained from the gallery.

Prescott McCarthy approaches texting and emailing from a reductivist point of view. He creates blow-ups of printed messages on which selected passages are redacted — similar to what some defendants do when subpoenaed. The ambiguous messages result in phrases such as, “The red flag was up … the house was silent,” and “the color of the dessert … She was outlined for a last moment,” are fragments of larger stories. The artist describes these messages as, “looking thru (sic) memories with poor analog reception,” and the selectivity of memory is a key concept in this work. Rather than hanging these messages on the gallery walls, he places thousands of them inside a 5-foot glass house. The inherent fragility of a glass house furthers his intention to convey the ephemeral nature of memories and of the written and spoken word.