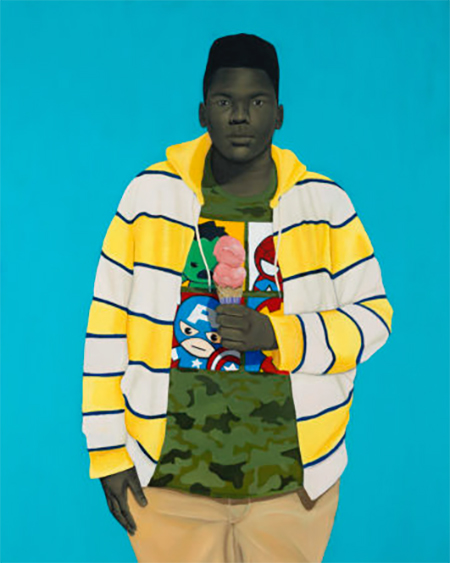 Award-winning portrait painter Amy Sherald is known for her masterful depictions of African American subjects. In the past, her works had a particular fantastical character; here the imaginative qualities are less obvious and whimsical, but nevertheless powerful in their subtlety. While Sherald’s technique is impeccably realist, her figures are posed stiffly in front of luminous, brightly colored grounds. The paintings feel distinctly unreal, despite their skillful representation. For Sherald, a childhood spent in the South instilled in her an insight into performed identity, stereotyping and assimilation.

“Innocent You, Innocent Me” depicts a boy with a cartoon t-shirt and a pink ice cream cone. Together, the title and the image become far more than a portrait of an individual; it recalls the way that American society perceives black adolescent boys as men, and black men as threats. In “Pilgrimage of the Chameleon,” a man in slacks, a button-up and a heavy coat holds a bouquet of balloons. We can’t know whether he’s in disguise or appearing as himself, or who the balloons might be for or to where he’s journeying. It’s as if we have come across the man in the midst of his task and, with an expectant expression, he’s waiting for us to make the next move.