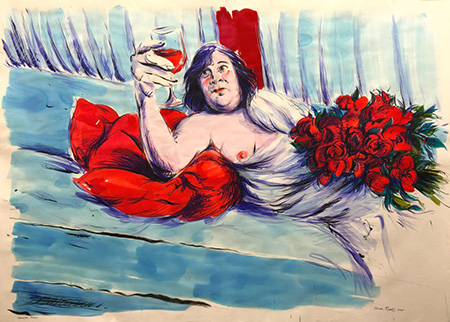 Lena Moross creates large-scale, fluid images of beauty that are couched within a social narrative in her exhibit “For the Love of Carmine.” Her impressionistic watercolors, rife with color, reflect the experience of growing up a transgender male in the late 1940s.

Her work is delicately, intricately drawn, with vibrant colors spilling over the edges of the forms she creates. Moross says she is fascinated by the colored plate illustrations of the 18th- and 19th-centuries, printed etchings colored by hand with watercolors. “The artists were paid per print. So they tried to rush to make more, and certain colors would go outside the line, which was not intended. [To my] eye it was absolute magical beauty ...”

Moross uses this style of work and a color palette that is equally vivid here to highlight and define the feminine curves and lush shapes she paints, representing what it’s like to be a woman caught within a man’s body. Both literally and figuratively, she goes beyond the conventional drawn lines. Along with these ripe, voluptuous paintings, the exhibit includes an insightful staged video depicting her subject, Carmine, and Moross herself.

The artist typically creates a series on a specific subject, and it is a worthy one here. She was captivated by the real person, Carmine Messina after meeting him/her, heavily made-up and dressed in women’s clothing, on a Hollywood street corner. Through that meeting, Moross began to explore, with her subject, what it means to be transgender. Her intimately sensual paintings delicately reveal and respect Carmine’s hidden story.

These works have the other-worldly quality of a dream and convey a sustained intensity. Carmine is presented as a joyous, self-realized person who has endured many struggles in order to express herself. In a 98 by 48 inch triptych, three paintings respectively titled “Pose #1,” “Pose #2” and “Pose #3,” Carmine is viewed from behind and from the side, with a bouquet of red roses casually placed on the bed in front of which she stands. Presenting both a feminine grace and shyness that nearly eclipses the figure's stocky girth, Moross masks the genitalia, showing the true spirit that Carmine shows the world, one that is uniquely female. The brilliantly colored roses aptly represent the blossoming of Carmine’s self-actualization.

“Dancing Carmine: After Degas’ Little Dancer” portrays the subject in a simple dress against a background of vivid aqua blue curtains streaked with red. The curtains could be a sky against which Carmine’s figure is ready to soar. Again there is a wonderful contrast between the feminine pose, the almost ecstatic hopefulness of Carmine’s face, and the more awkward body, the vessel which contains the subject’s life-force. Even without the titular reference to Degas, the fluidity of Degas’ dancers is certainly present.

Red is used frequently in Moross’ works, both large and small. The color is seen in a glass of richly hued wine, in her soft and sensual roses — as viewers, we can almost experience the powdery touch of the petals — and in a tangle of red pillows. The pillows, which appear in several works, are bunched like an abandoned cocoon. Has Carmine emerged from this chrysalis? In “Carmine Rouge,” the fullness of rebirth is captured. Carmine raises a glass of wine while lounging on a bed, breast exposed, lower body draped in soft folds of fabric and a bouquet of roses.

Throughout this series, Moross manages to mesh Carmine, whether nude or clothed, into a combination of feminine poise and poignant awkwardness. Whether beneath sensuous curves or bulky shape, there lies a potential for blossoming and for grace. Beyond the fusion of gender lies a universal sense of an individual searching for the fullest expression of self.