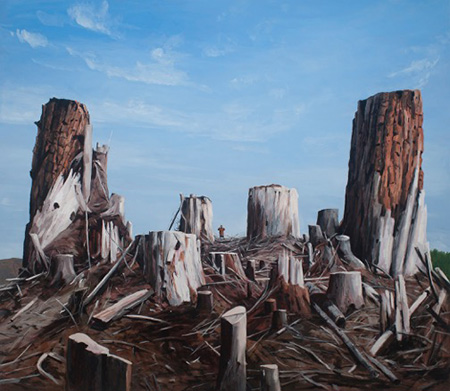 What happens when an artist pioneers a style or theme that, over the passage of time, gets superseded or exceeded by his own breakthroughs or those of other, younger artists? Michael Brophy pushes the question to the foreground. The quiet insistence of dread or alarm over vanishing evergreen forests and wildlife habitat in the Pacific Northwest is now in danger of being overwhelmed by the work of other artists such as Mary Iverson, Nathan DiPietro, Patte Loper and Ula Trudnos. Some of them followed Brophy’s trail of painterly, frankly pictorial vistas of manmade devastation.

Without dwelling on how the art world shifts and changes while some artists do not, it is fortunate that Brophy is now evolving cyclically rather than progressively. The current “Forest and Clearing” pictures echo some of his most majestic — and familiar — statements of the last two decades, years when Brophy was showered with critical praise, honors, grants, awards and fellowships.

If anything, as the 56-year-old Portland native put it in a recent telephone interview, his current view of nature hereabouts is “deeply pessimistic, but post-grief.” Now, as in the “The Machine in the Garden,” “multi-generational clearcutting” is unveiled in all its ugly nakedness, glaring evidence that, after initial clearcutting (de-forestation without reseeding), successive natural tree growth seasons are cut down before maturity. “Reveal” is a terrifying lunar Stonehenge of stumps and rocks at the mouth of the Columbia River near the Pacific Ocean. “Tour” heightens the clear blue sky above a wrecked, charred and scarred logs-and-stump scene ready for tourists of the 21st century.

Subject matter aside for a moment, Brophy’s brushwork, often in danger of appearing slapdash or unnecessarily hurried, attains a welcome, relaxed touch with numerous short jabs and dashes that communicate the flickering sunlight in a forest clearing without ever seeming Impressionistic — or Kinkade-ish.

The two enormous canvases here, “The Orphans” and “The Machine in the Garden,” are Brophy at his best, cinematic yet secret; overpowering, but suggestive of an angry humility symbolized by the ubiquitous solitary figure. In “Old Growth (The Visitor),” “Homage (The Traveler)” and “Passenger,” wherein diminished male figures in trek-ware hold cameras or smartphones, Brophy again raises another troubling dichotomy: how photography, far more than painting, has diminished our perception of nature — at a remove.

Brophy has always been admired by writers, perhaps because of the open-ended, literary or narrative potential of so many of his paintings. It’s a fact that art museum curators have pointed out in important thematic group show catalogue essays. Brophy was the baby Jeremiah, telling us what was going to happen and what was going wrong in the forests that are not protected by law long before such positions became de rigueur for artists. While he is constantly seeking out remote, “untouched” areas for inspiration, such as Crabtree Valley near Lebanon, Oregon, I would love to see Brophy’s range of geographic subjects expand even farther to, say, the Kamchatka Peninsula in Siberia; the evergreen forests of northern British Columbia; or the endangered rain forests of Indonesia. In an age of artists’ greater commitment to specific social or political issues such as the environment, Brophy was ahead of the game. But with our still new global perspective, a radical shift or temporary geographical re-location beyond North America could work wonders.

As they are, the nine smaller 18 by 20 inch oils complement the other canvases beautifully. The 11 larger canvases are, astoundingly, only a part of the last two years’ work, so productive is Brophy. The darkening vision is still there, like a smoldering volcano.