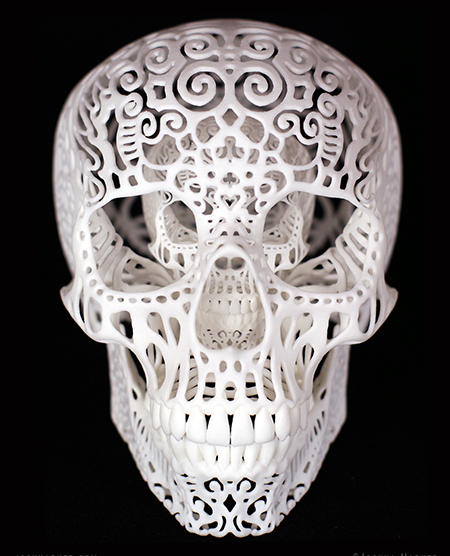 “I am not a machine, and unlike the futurists I don’t want to be,” writes Jenny Filipetti in her artist's statement for “Virtual Object.” For the group exhibition, featuring sculptures created with 3D printers, Filipetti presents “Breath Vessels.” The piece encourages visitors to exhale into a sensor, which generates a file of a three-dimensional sculpture based on the intensity and duration of the breath. The resulting objects taper in at both ends like a vase, and they have undulating surfaces that record every gust of the organic tempest. It’s true that Filipetti’s work, inspired in part by computational biology, is conceptually remote from the metallic machismo of futurism. However, the process by which she collects her sculptural data-points is still so new that it feels as though she developed the idea from the cockpit of a time machine. She’s a humanist futurist.

All of the artists in “Virtual Objects” cast their minds into the near future in a similar way, creating visceral experiences through innovative, mechanical means. McArthur Freeman stretches and twists digital polygons like taffy, 3D prints them and casts them in bronze. They look like primordial creatures coated in La Brea tar. Rosalie Yu chronicles the sensory experience of an embrace by progressively entangling two figures into a cyclone of distorted limbs. Josh Harker, who helped develop 3D printing technology during his career as an industrial designer, encases a small skull within a larger one in the delicate, undulating “Crania Anatomica Filigree: Binary.” The profound feelings these works conjure, through the vehicle of cutting edge technology, represent a quantum leap in the right direction.