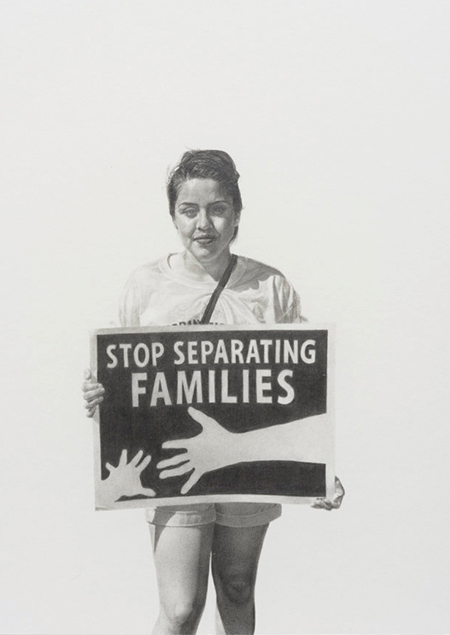 "The Triumph of Labor" is the title of Andrea Bowers' latest effort as well as its literal and symbolic jumping off point, in the form of a 22-foot-long, black marker on found (recycled) cardboard. Bowers takes a late-19th century illustration by Walter Crane, depicting a May Day worker's march, as its source. That's right: Bowers is up to her usual shenanigans: illuminating, highlighting and celebrating the objectives and protests of the poor and disenfranchised, in turn throwing something of a monkey wrench in the art world's very different celebration of its own. As surprising and charming as it is that a nine-foot high, 22-foot-long drawing is able to feel modest, or rather humble. It’s not at all surprising that her latest intimate drawings — photorealistic graphite or colored pencil on paper depictions, mainly of protesters — continue to draw us in, impressing as much with their craft as their compassion (or is it the other way around?).

The exhibition includes a beautifully color-coordinated photo wall featuring portraits of May Day/$15-an-hour-minimum-wage protesters baring their signs and messages (at least one of whom became the source for one of the intimate drawings). An installation is dedicated to education, including "Education Should Be Free" in both a cardboard-and-colored-light wall lamp and posters on the floor, along with an impressively high stack of printed-out emails related to Bowers' work with SEIU Local 721 (she's part-time faculty at Otis). It's hard to worry about whether Bowers' efforts will eventually reverberate through the world of high art, when they're clearly already stirring up such substantive recognition in the laborers whom she documents