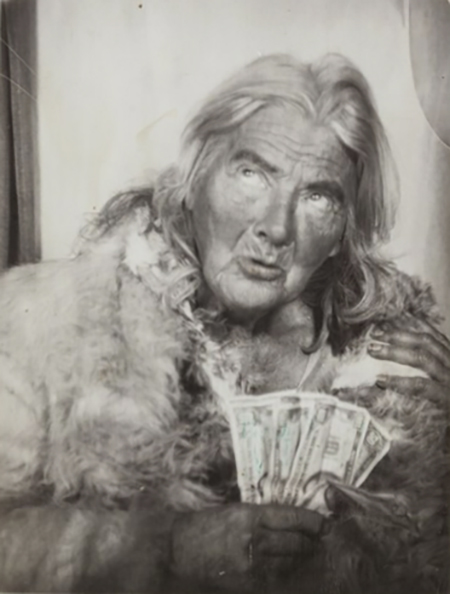 The legacy of Lee Godie (1908-1994) is an inextricable part of Chicago’s art history. Between the 1960s and 1980s, Godie painted profusely, selling her canvases to passersby on the steps of the Art Institute of Chicago. Godie was self-taught and a homeless person, but she was by no means a traditional “outsider artist.” With a passionate and calculated approach to cultivating her own art market, Godie also took hundreds of self-portraits in a bus station photo booth, using the photographs to supplement her paintings as an autograph, and to reinforce her importance as an artist. “Lee Godie: Self-Portraits” highlights this facet of her oeuvre, and underscores the power of her image-making abilities — one that was developed through perceptive study of the masterworks in AIC collection and the rigor of her creative practice.

The photographs themselves are quite tiny, though Godie packs each little rectangle with intrigue and symbolism. She applied makeup before shooting and often drew on the finished print for dramatic effect; but most notably, Godie posed with specific props to establish her intended aura. In a few works, Godie cradles rolled canvases and brandishes her paint palette, emphasizing the romance of her trade. In many others, the artist flashes handfuls of cash in a gesture that is best described as swagger. Godie’s photos resonate in our an age of widespread, internet-based self-portraiture that she did not live to see. She anticipated the now familiar fabrication of new personas afforded by selfie culture.