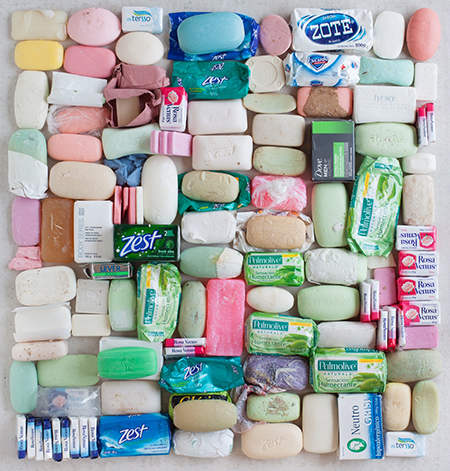 In Tom Kiefer’s evocative photographs, mundane personal effects become politically laden emblems of our government’s handling of illegal immigration. Working for 11 years as a janitor at a U.S. Border Patrol station in southern Arizona, Kiefer routinely recovered items from the trash — items that officials had seized from border crossers and then deemed inessential or “potentially lethal.” Think toothbrushes, small tubes of toothpaste, combs, soap bars, candy bars, shoelaces, work gloves, sunglasses and canteens. Yet through Kiefer’s meticulous grouping of like elements as well as perfect focus and lighting, the items become the venerated components of a still life. Belts of various sorts are curled into concentric circles to compose “Belt Labyrinth.” Wrapped condoms are arrayed into a crazy quilt of colors in “Condoms.” And yellow cigarette lighters by the dozens transform into a benign sunflower image.

Given the exhibition’s ironic title, “El Sueño Americano (The American Dream)” and the incredulousness a viewer might feel as to why certain items would be seized, it is clear that Kiefer’s concern is the mechanized, depersonalized procedures whenever migrants are captured then released back to their native countries, often after being stripped of wallets and food. In a piece such as “43,” in which 43 sets of rosary beads in various colors fill the composition, the term “dehumanization” might be fitting as well.