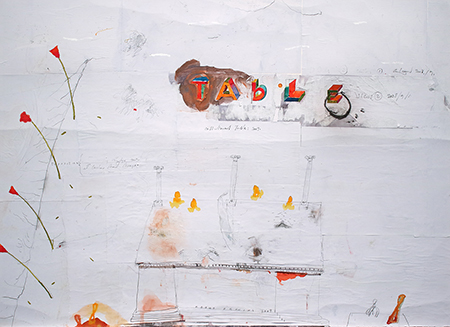 Patrick Graham is one of those exceptional artists who has the ability to create works that derive from his own turbulences and connect them to the collective experience. Born in the idyllic midlands of Ireland in County Westmeath, where he felt one with nature and God, he describes it as a place of silence “with an orchestra of beautiful sounds — buzzing, chirping, flitting.” His paintings echo how this tranquility was ruined by circumstances that were out of his control.

In his current exhibit “Thirty Years: The Silence Becomes the Painting” works range from large scale paintings to intimate mixed media drawings. His artwork is complex and intuitively rather than logically driven. It is driven by his relationship with God and the political and social situation of Ireland. The deluge of sex abuse scandals that involved the Irish Catholic Church in the 1990s caused a shift in the attitude of Irish Catholics towards an institution that up till then provided them with a place for spiritual growth, guidance and encouragement. Weekly church attendance has tremendously declined since then. This is significant, given that the Emerald Isle was once called to be the most Catholic country in the world. Against the backdrop of this breach in faith, Graham’s images gain a new meaning.

For example, “Lough Owell” (1986) presents a new and somewhat sexualized version of the Crucifixion. Here Christ is no longer a man wearing a perizoma (loincloth), but a female nude. “Cold and Fatal Heroes” (1988) features a self-portrait of the artist on the right bonding with a baby. On the left is the image of a veiled boy with his tin drum, referring to Volker Schloendorff’s film “The Tin Drum” (1979), a visual adaptation of the novel by German Nobel laureate Günther Grass. Here it might be useful to know that the main protagonist, a young boy by the name Oskar, uses his drum as a protest against growing up and becoming part of the corrupt and scheming world of the adults in his life. Above the veiled boy with the drums in Graham’s painting appear the words “Love is colder than death.”

Furthermore, one should consider that Ireland has been the scene of a violent thirty-year conflict, known as the Troubles, which began in the late 1960s. It was a territorial conflict between the Catholic Nationalists, who believe that Northern Ireland should become part of the Republic of Ireland, and the Protestant Unionists, who believe that Northern Ireland should remain part of the United Kingdom.  This bloody clash didn’t emerge overnight, but was the result of the unfair treatment of Irish Catholics for centuries. The Good Friday agreement in 1998 ended the Troubles by creating a power-sharing government. Yet Northern Island is still divided by peace walls that separate Catholic neighborhoods from Protestants. Many people want them to stay. Hence, Graham’s diptychs, where two canvases are joined, offer a symbolic framing of this small island country, or any other place that’s separated by two ideologies engaging the difficult process of establishing a common ground.

In “Wreath: Collateral Series, 2005-2006,” an oil on canvas diptych, the word “Wreath” is written twice in various colors of paint across the top of both panels. On the left appears the word “Ezekiel," which refers to the prophet-priest of ancient Israel. In Hebrew the name means “God strengthens." On the upper left one finds the initials “H.B.,” referring to Graham’s deceased friend Hans Burkhardt, known for his paintings in response to war. The words “House,” “King” and “Of Tyre” also become visible. The latter is a reference to the Siege of Tyre, orchestrated by Alexander the Great in 332 BCE, in which 2,000 people were crucified. Underneath those words there’s a small hill covered with crosses. The red paint that drips from it and a red ring-shaped image on the lower right, evoke the pain and the blood that was shed in the world as the result of ideological conflicts and subsequent wars.