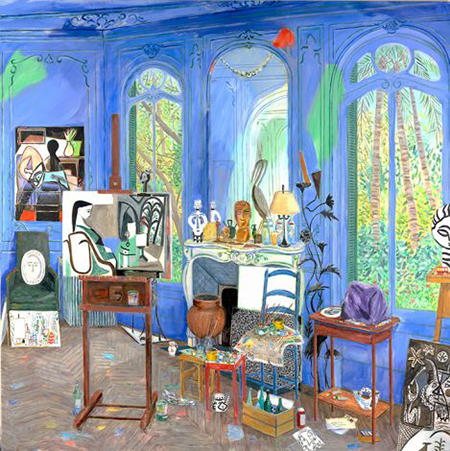 The importance of tradition in art was historically a received idea because older artists trained young artists. This had its downside: sterile imitation. But the converse situation today is that craftsmanship is too often subordinated to theory. This has its own unforeseen consequences: artists don’t know what to create except new permutations of handed-down theory-recipes. Many artists also reject the premise. Can art that matters nourish itself on the past? Consider Picasso or Roy Lichtenstein. Or for that matter Damian Elwes and Shawn Huckins, two contemporary painters who deal with art history (and, indeed, history) with a proper mix of deference and irreverence — and craftsmanship.

In Adolfo Bioy Casares’ 1940 story, "The Invention of Morel," an escaped prisoner finds himself on a island, observing visitors to a museum there, the only inhabitants. He gradually falls in love with a woman and tries to talk to her, but she ignores him as invisible. After noticing other anomalies, the narrator realizes that the people are mere holographic projections of dead people that have been played by a machine invented by the late Morel, the name a Casarean homage to H.G. Wells’ mad scientist, Dr. Moreau.

Elwes’ "Creative Spaces" project reconstructs in his paintings, from documentary photographs, original artworks and visits, the studios of famous artists. This shares something of Casares' search for the lost past; they take us on a kind of forensic sentimental journey to various art-hero shrines: René Magritte’s Brussels; Georgia O’Keefe’s Abiquiu, surprisingly modernist; Hockney’s Los Angeles; Lucian Freud’s London (with paintings perversely turned to the walls); Ai Weiwei’s Beijing. Jeff Koons’ New York studio is complete with a large balloon dog. While it’s tempting to want to see these reconstructions painted in the style of the absent artists, they’re pretty much all done in Matisse or Dufy style, with minimal shading, even lighting and bright colors: the crimson-walled Vence studio painting recalls Matisse’s "Atelier Rouge” (1911).

There are, however, some interesting exceptions or anachronisms. The palette in the painting of Matisse’s Vence studio is more Bonnard than Matisse; and the Cubist gray and brown palette used for Picasso’s Bateau Lavoir and Giacometti’s Paris studio are poetically right, if not perhaps 100% factually accurate. The delicate, decorative beauty of Calder’s studio is more Florine Stettheimer than Sandy Calder. All the paintings are, however, chock-a-block with items from the artists’ oeuvres; they are carefully curated reconstructions. These are beautiful paintings in their own right, and catnip for kunst-betrunkener menschen und damen (art-besotted gents and ladies — you know who you are).

Huckins’ "Everything is Hilarious and Nothing is Real” is comprised of thirteen paintings that faultlessly replicate (though in acrylic, not oil) nineteenth-century paintings and photographs, some of them iconic images that will resonate with the viewer, with others more generically historical. Atop these images of sobriety, heroism and Romantic longing, Huckins superimposes casual messages taken from social media. The painting from which the show takes its Twitterspeak title, for example, is George Caleb Bingham’s "Raftsmen Playing Cards” (1847), one of his improbable but somehow convincing neoclassicist interpretations of Jacksonian frontier democracy.