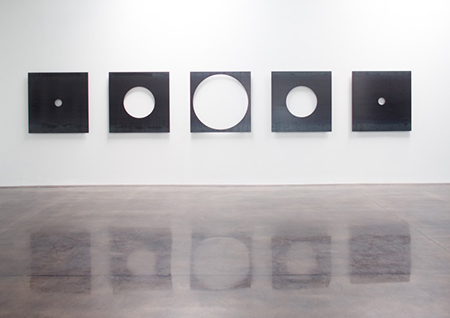 Linnea Glatt’s newest works have never looked so good. This inaugural show in a minimal and austere space designed specifically to highlight art objects is a perfect match for her minimalist approach to composition and execution of mostly work on paper. In the past, Glatt has used thread as a drawing medium, exploring the possibilities of line through manipulating and sewing the material into the paper. In this body of work her main focus is on cut and shaped fabric mounted on paper, forming rhythmic shapes in solid circles that vary in size and seem to move up and down vertically, as with "InVerse #1" and “InVerse #2.” Often hypnotic, tranquil and calming, the pieces exude a serenity that typically depends on a succession of shapes in alternating sizes that imply movement.

In "Decrease/Increase" thread forms dark solid orbs on either side of a long horizontal plane such that each successive orb contains a patch of light in the center. The resulting central shape is a type of bright white eclipse of where the forms started.  In “Rise" seven rectangular sheets of paper, a manila colored sheet to the left is flanked by the final piece on the right that’s completely comprised of dark fabric. Those in between have their picture plane successively filled from the bottom up with the fabric. This effect completely triumphs in the titular piece, “Continuum," where Glatt uses hot rolled mild steel to form five individual squares, with circles cut out of the center. The largest circle occupies the central section, the metal effectively reduced to an outline. The lighting and dark/light contrasts conjure a celestial metaphor whose content takes us well beyond mere material.