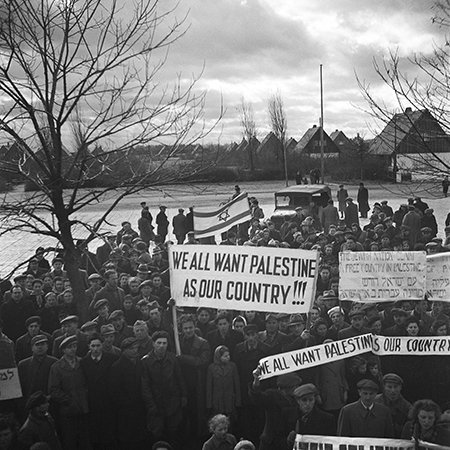 Ruth Gruber, "Holocaust survivors greet members of the Anglo-American Committee of Inquiry on Palestine in the Neu Freimann displaced persons' camp, outside Munich. The DPs participate in a Zionist demonstration against Great Britain's refusal to lift ...

This retrospective of Ruth Gruber’s photographs, curated by the International Center for Photography, is as much a testament to Gruber’s pluck as it is to the work itself. The photojournalist often smuggled herself into ports and onto boats, at her own peril, in order to capture images that would serve as the world’s only proof of the post-Holocaust Jewish refugee crisis. The most powerful images in the exhibition are those that reflect her skill as a photographer, as well as her intrepid nature. One photograph of 1,500 displaced Jews forced onto a British prison ship is shot through barbed wire. Her camera finds the refugees in protest, flying a Union Jack flag with a swastika painted on it.

The retrospective also includes multiple vitrines of ephemera, like a Life Magazine spread featuring Gruber’s images, culled from over a million items in her personal archive. On the eve of Gruber’s 105th birthday (yes, Ms. Gruber remains alive and well) and during the current refugee crisis, her work continues to be deeply relevant, reminding us that one person can change the way the rest of us see the world.