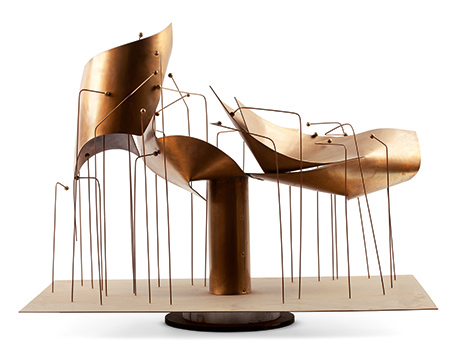 Sculptor Claire Falkentstein is included in Hauser Wirth and Schimmel’s landmark exhibition “Revolution in the Making: Abstract Sculpture by Women, 1947–2016,” but the selection of included works hardly suggest the breadth of her output. For that, one must turn to “Claire Falkenstein: Beyond Sculpture,” a lively survey that includes paintings and prints, with various sculptures interspersed, many more beautiful than the Hauser Wirth and Schimmel selections. Curated by Jay Belloli, the show begins with such early work as a self-portrait and a landscape. The self portrait, “Skeptical at Nineteen” (1927-28), presents the young artist in a three-quarters pose, looking out at the viewer with an intense stare. In its color palette and evident brushstrokes it is of the period. Soon after that, however, she is experimenting — “Cellular” (1941) in the same gallery is an abstract painting of biomorphic shapes set within a custom-made parallelogram frame.

The artist was fortunate enough to have gained early recognition, receiving a gallery show while still a student at UC Berkeley. By 1948, she enjoyed a one-person show at the San Francisco Museum of Art and the Met in New York. A small wire sculpture created in 1950, “Leda #1,” is in its own display case, and it’s historic. The work signaled her turn to working with wire and with metal. That same year she fell in love with Paris, and moved there for the next dozen years. Due to financial constraints, she worked in a cramped studio with humble materials such as wire and wood. But when necessary, she knew how to scale up.

She continued finding new materials to work with. Invited to Italy, she learned to work with glass. In 1961 Falkenstein made the famous gates for Peggy Guggenheim’s palazzo (and now art museum) on the Grand Canal, imbedding Venetian glass into the gates' metal network. In the dated but quite interesting documentary showing at the museum, she comes off as an artist who did what she wanted, whether it was to go abroad or to chose materials she wanted to work with, be they conventional for sculpture or not. “It’s all about ideas,” she says. “Some are lyrical, some are dense and aggressive." For her the materials and technique were secondary.

In 1963 she returned to the U.S., settling in Venice, California. The exhibition shows photographs of a couple of her major art commissions, including a fountain in front of the California Federal Bank Building on Wilshire Boulevard — a massive sculpture of copper tubing and Venetian glass. Unfortunately, it no longer exists.

One of the best works in the show is “Flora” (1973), a floor sculpture made of sheet bronze in a coppery tone. Cut and assembled into irregular shapes that seem to swoop up like the petals of a flower, it is interspersed with metal knobs perched on the end of rods. When the piece was activated (it was once equipped with a motor), the knobs would strike the “petals” to produce a bit of percussive music.

Although Falkenstein’s mature works were abstract, she often acknowledged her connection to nature, having grown up as she did in Coos Bay, Oregon. And in a couple of very large paintings she did towards the end of her life, she incorporated human figures. As she once said, “I feel as though we are not separate from nature, we are part of nature."