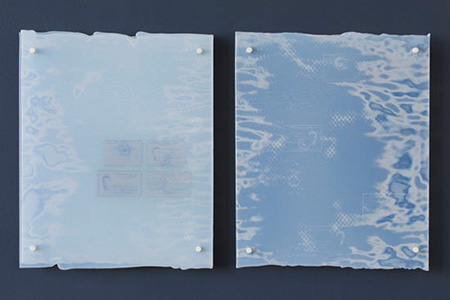 The phrase “as clear as glass” notwithstanding, not everything made out of glass is optically or thematically transparent. “Hidden Narratives” considers meanings and implications that are more recondite. Typically we think of artwork in glass as broadly symbolist or formalist — probably due to its material elegance and structure —but glass is every bit as effective in communicating narrative. In fact the four artists here, Erin Dickson, Michelle Murillo, Jeffrey Sarmiento and Kathryn Wightman, successfully (and perhaps surprisingly) integrate traditional and newfangled glass techniques with printmaking, one of the most nuanced, layered, and implicitly narrative of artforms.

Dickson, based in the north of England, deploys strips of charcoal- and steel-hued glass to create cityscapes, as in “Window_3,” which depicts the views from her bedroom windows during different periods of her life. Given the work’s grayscale palette, it is primarily the exquisite variations in texture that delineate the forms. The panels become reveries, elegies, portals through time, all tinged with melancholy. They lead us to reflect on what and whom we’ve lost and gained through the years as the view out our own windows has changed. In this highly cinematic work, the artist has created a veritable biopic: a view to a kiln.

For her part, Murillo, based in Oakland, California, reaches even further back into time, into the lives of her ancestors. “Waypoints” positions wafer-thin replicas of her progenitors’ I.D. cards in an impeccable installation that plays with the visual construct of seriality. Fashioned from fine glass powder, the cards have a granular, eroded quality, attesting to the ways in which identity is sanded away by the passing of generations and the loss or obscuring of genealogical records.

Sarmiento, a Filipino-American now living in the United Kingdom, is also no stranger to themes of heritage and identity. He often reckons with the mutability of human beings as living, breathing, ever-evolving cultural artifacts. In his insouciantly titled “Flutter” and “Flitter” he embeds strips of screenprinted imagery inside fused glass, creating a dizzying moiré effect. On first glance, the insects in these companion pieces seem identical, but in fact, one is a blue butterfly, the other a moth. The connotations — like racial, ethnic and cultural stereotypes — lay bare our prejudices. A butterfly radiates beauty, while a moth is viewed as a nuisance. The differences between the two, Sarmiento suggests, exist only in the viewer’s perception.

Finally, Wightman takes a trompe-l’oeil tack in “Stained” and “Loss,” both of which mimic the appearance of fabric. In the former piece, the New Zealand-based artist reinterprets an entire Asian carpet from her grandmother’s home, including a coffee stain that, in her view, made the carpet all the more precious. In the latter work, similar patterns in each of two side-by-side panels grade finely from light to dark. Apart from the gee-whiz virtuosity and novelty of the exacting reproduction, the works also have an affecting tenderness. In transliterating fabric into a different medium, Wightman has tied together two elements — memories and glass — that are simultaneously inviolable and fragile. She, along with the exhibition’s other participating artists, has married the physical properties of glass and printmaking to excavate deeply personal emotions and recollections. We as viewers are richer for the excavation.