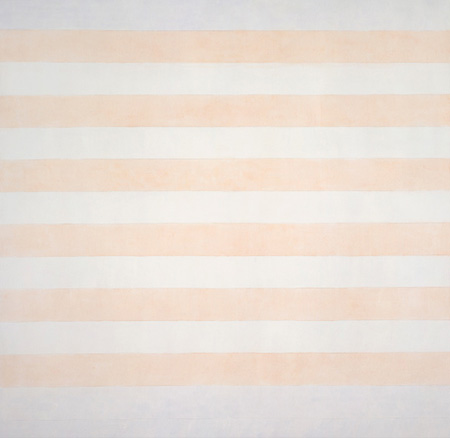 Championed by Ad Reinhardt, claimed as a pioneer by minimalists, and sanctified by feminists, Agnes Martin’s reductive work resists connotative reduction. And while her adoption of the grid as the template of the bulk of her production would suggest that she was loyal to what Rosalind Krauss rather heavy-handedly identified as the central myth of modernism — the notion of the grid as a return to painting’s primordial structure — the effects that Martin was able to achieve within her severe self-imposed constraints reveal, if anything, her freedom from any preconceived notion of what the grid could be made to express. As Anna Lovatt argues in a catalog essay for this comprehensive survey of Martin’s output, Martin’s steady depersonalization of her technique is perhaps best understood in terms of Roland Barthes’ literary concept of the zero degree: as an effort that “substitutes for the idea of opposition, that of slight difference, of the onset, of the effort toward difference, in other words of nuance.”

In an age in which expression has been degraded to the crude assertiveness of a tweet or a status update, Martin’s lifelong dedication to nuance takes on ethical significance. Her work resolutely resists instant or compressed communication and in so doing also resists the fetishization of identity that inevitably attends declarative discourse, which incessantly invokes opposition to sustain an insecure sense of self. Martin’s defiant statement “I’m not a woman,” in response to an interviewer who pressed her attitude to feminism indicates how far she was willing to go to elude categorization.

“My paintings have neither objects, nor space, nor time, nor anything — no forms. When you give up the idea of right and wrong, you don’t get anything. What you get is rid of everything, freedom from ideas and responsibility.” Ideas, as opposed to inspiration or intuition, were an explicit anathema to her to the end of her long life, as was “responsibility.” When in 1967 she quit New York just at the moment when her work was achieving acclaim, it was to escape “an overdeveloped sense of responsibility.” A year later, she showed up in Cuba, New Mexico, and settled on a rented piece of mesa in the remote desert. She didn’t resume painting until 1974, when she was 62.

Her body of work, therefore, cleaves into two phases. Her early ‘50s biomorphic abstractions, which garnered her an offer of a show from Betty Parsons that Martin was too poor to take advantage of, were characterized by muted grey and cream colors. At this point she was living in Taos, New Mexico but in 1957, Parsons offered to represent her on condition she relocate to New York, which she did. Already 45, she moved into a loft in Lower Manhattan and rubbed shoulders with the likes of Ellsworth Kelly, Jasper Johns, Robert Rauschenberg, Lenore Tawney, and Robert Indiana. Her compositions became more geometric and began to rely on the repetition of simple shapes. In the early ‘60s, after hospitalization for schizophrenia, she made the decisive step of adopting the allover grid penciled on or scratched into a monochromatic ground. When she began to pencil the grid directly on white canvases, she abolished the distinction between drawing and painting. Critic Kasha Linville would note that these exquisitely refined works revealed aspects that changed with viewing distance. Up close, they captivated with their delicacy of line. From a distance, they became the subtlest shades of gray. Neither view was definitive; they had to be synthesized in memory.

It is in the context of her beginning to gain recognition that one starts to get a sense of what Martin meant when she complained of an overdeveloped sense of responsibility. With recognition also came misrecognition. Minimalists like Donald Judd hailed her work. Lawrence Alloway included her in a show at the Guggenheim titled “Systemic Painting.” She was featured in a Robert Smithson-curated show at Dwan Gallery. The impersonal severity of her work tended to suggest that it was conceptually conceived, which overlooked Martin’s reliance on what she called “inspiration” and her intense antipathy toward “ideas,” which she associated with egotistical striving. Conceptualism privileged process over execution, but, from Martin’s perspective, at the price of grossly exaggerating the conscious agency of the artist. This contradicted the role intuition and revelation played in her creative experience. As she told a visitor who later in life asked her what she did when she entered her studio, she sat and waited to be inspired.

Since it is no secret that she suffered from periodic psychotic breakdowns, a crude psychological interpretation of this passivity attributes it to her dependence on hearing voices. But this devalues the insight her illness likely gave her into unconscious processes overlooked by more ego-driven individuals. In any case, she was not eager to take on the burden of being the “mother” of minimalism.

Fortunately, her self-removal from New York did not end her career. Offers of retrospectives and the publication of a portfolio of screen prints titled "On a Clear Day" encouraged her return to painting. Her canvases now began to feature pale bands of color and grey instead of the previous division into a grid. Marion Ackermann astutely notes that the colors of these later paintings possess a luminosity associated with neo-pointillism and can give the impression of being backlit. As with the grids, Martin was able to extract from the band motif a breathtaking range of subtle variations. Briony Fer argues that in these banded paintings, paleness functions to awaken in the viewer a heightened visual acuity that, in turn, generates the ecstatic sensation of the paintings coming into being in front of one’s eyes. “Painting had become for [Martin] a temporal medium: they took a long time to make and they take a long time to see.”

At the age of 90, Martin was still capable of surprising. Alongside the paintings displaying her by-then classic format, she began producing a small group displaying black geometric shapes starkly contrasting with their light grey grounds. Martin herself acknowledged that these paintings were “scary,” despite titling one of them "Homage to Life." Fer suggests that the artist was revisiting earlier motifs and, perhaps, challenging her long-standing devotion to a pure non-objectivity untroubled by even the slightest hint of iconicity.  Perhaps they are something else altogether, an intimation of individuation at the moment when individuation is about to be undone by death.