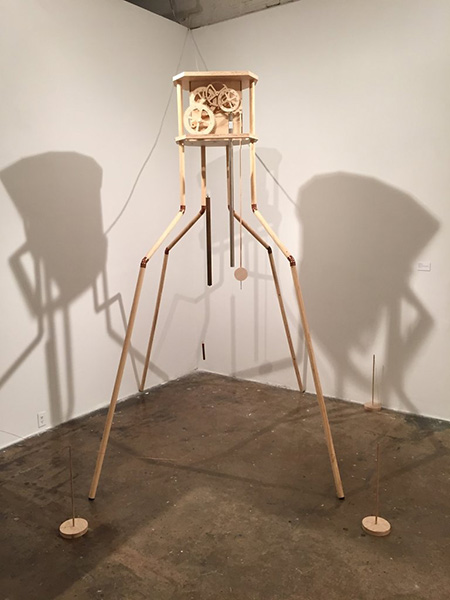 When we talk about creativity in the arts, we usually focus on the artists who make visual art, music, theater or who write literature. But creativity can flourish in many ways, and in watching the growth and success of a relatively new program that is coordinated by Blue Star Contemporary Art Museum, which was started because of the vision of a longtime board member, I began thinking about all the worker bees — the resourceful volunteers who rely upon their own creativity to make things happen for the benefit of some cause they believe in. In this instance, such a worker bee is Angelika Jansen, a German former gallery owner with a degree in literature who resides in San Antonio and Berlin. The cause is to provide a life-changing experience to help elevate talented artists to the next level in their development.

Jansen's initial idea was to instigate an exchange exhibition between San Antonio and Berlin artists, so she brought the idea to the attention of Bill Fitzgibbons, Blue Star's executive director at the time. While both loved the proposal, they agreed that it would be cost prohibitive, so Jansen went back to the drawing board. Wouldn't it be great, she thought, if San Antonio artists could participate in the international artist residency program of Berlin's Künstlerhaus Bethanien, which has a worldwide reputation for providing year-long studio residencies for 25 artists annually from around the globe. So she met with the program's director, Cristopher Tannert, to learn more about the specifics.

Upon discovering that the cost of the program for a full year would be rather pricey and only one artist per year would benefit, Jansen conceived the idea of splitting the residency into quarters, so that four San Antonio artists could each spend three months in the program. When Tannert approved this approach, Jansen and Fitzgibbons went to local institutions and raised funds to get the program off the ground. It was also decided that, following their residency, each artist would exhibit new work at Blue Star.

Due to the generosity of the City of San Antonio Office for Cultural and Creative Development, the University of Texas San Antonio, Palo Alto College, and local real estate developers, the first four artists visited Berlin in 2013-14, and exhibited their work at Blue Star soon after their return. Additional supporters have come on board to ensure the sustainability of the program in subsequent years and, under the stewardship of current Blue Star executive director Mary Heathcott, four artists have just been selected by a jury of art professionals for the program's fourth cycle.

When I queried some of the Berlin Residency Program alumni about how the experience was beneficial to them, all agreed that it provided them the freedom to work in an environment that was inspiring and devoid of the normal pressures of daily life. As a result, they not only had plenty of time to concentrate fully on their studio practice, but also could engage themselves extensively in research and development opportunities that emerge from interactions with artists from many countries as well as from soaking up the cultural riches of Berlin.

For sound artist Justin Boyd, who exhibited a new installation at Blue Star, the Berlin research involved recording various sounds of the city, including its many clock towers, and visiting a clock museum where he was permitted to make recordings of antiquated musical instruments and vintage clocks chiming. Once back in San Antonio, he created "Going On Going," a sculptural hybrid of an age old clock and a Daddy Long-Legs. Constructed with assistance from his brother Dillon, who works for an organ manufacturer, Boyd's sculpture functions like a traditional mechanical clock. In the gallery, viewers could see and hear the movements of the hour, minute and second wheels. Once every hour, they heard the chiming of the strike mechanism. To replicate the effect of a clock tower sounding in the outdoors, Boyd attached a microphone to the chime, so that it picked up the vibrations and send them to an amplifier and then on to a delay pedal and finally out to a speaker mounted on the building's exterior.

When I asked Jansen what she learned from successfully launching the program, she said that the most important part of it was "to be persistent against all odds." Indeed, in our current economic climate, many smaller and underfunded arts institutions often take a "can't do" attitude and end up missing out on some amazing opportunities. With her "can do" determination and unbridled enthusiasm, Angelika Jansen reminds us that, with a little outside-the-box thinking, we can still beat the odds.