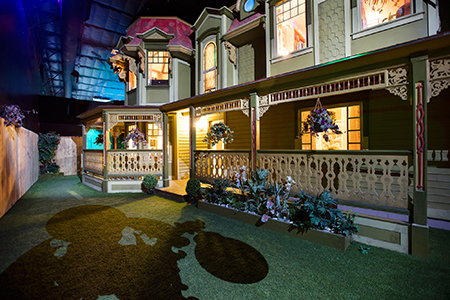 When I came to Santa Fe in 2012, Meow Wolf’s early days of throwing bizarre art parties in a row of houses called the Quadraplex were long past. The art collective had mounted a series of increasingly elaborate installations culminating in 2011’s “The Due Return,” a full-scale sailing ship at Center for Contemporary Arts. Suffice to say that they'd already built a reputation as local legends when I first encountered their work, in a 2012 group exhibition at Eileen Braziel Fine Art.

At the reception, I imagined an alternate reality in which late-period New Mexico modernism had triumphed over the more commercial contingents of Santa Fe’s art community, forming an unbroken line of avant garde artists that stretched to the present. Meow Wolf’s aesthetic ancestry points to Dada, Fluxus and COBRA more than Georgia O’Keeffe, but the modernists were considered a radically weird force when they first landed in New Mexico. Looking around at the masses of mundane and surreal objects climbing up Braziel’s walls, I saw a contemporary corollary to that rebellious history. This was art for art’s sake: fiercely experimental and utterly unsalable.

At the time, I didn’t know how rare it was to witness a Meow Wolf show in a white box, with the featured artists clearly demarcated. The group has filled art spaces, dance floors and a grocery store with displays that exuberantly mash up the work of its many members. Meow Wolf’s communal aesthetic might be described as “post apocalyptic cyberpunk acid trip,” or conversely, “sublime neofuturist cartoon sugar rush.” In early 2014, Meow Wolf teamed up with Game of Thrones writer and longtime Santa Fe resident George RR Martin to produce a sequel of sorts to “The Due Return.” With the financial backing of Martin, they bought an abandoned bowling alley on Siler, gutted it, and started construction on a 20,000-square-foot art installation-cum-amusement park dubbed “The House of Eternal Return.”

More than two years later, 135 creatives have filled the cavernous space with a two-story Victorian house that opens to a series of fantastical environments. The permanent exhibition is anchored by a science fiction narrative about the Seligs, a family that unwittingly opens a rift in time and space into which they disappeared. But theirs is a story that’s designed to be lived rather than told. Just prepare yourself for a real-life lucid dream that is awe-inspiring in its intricacy. Fridges, fireplaces, tables and toilets don’t function the way they’re supposed to in this house.

It’s the closest you’ll get to reliving the Exposition Internationale du Surréalisme, the 1938 show in Paris organized by Andre Breton that featured Salvador Dali, Max Ernst and other Surrealists. In one room, Wolfgang Paalen installed an artificial pond with real waterlilies and reeds, surrounded by wet leaves from the Montparnasse cemetery. “The House of Eternal Return” holds wonders that surpass that display in their monumental strangeness. Go once, twice, three times, and you’ll barely scratch the surface.