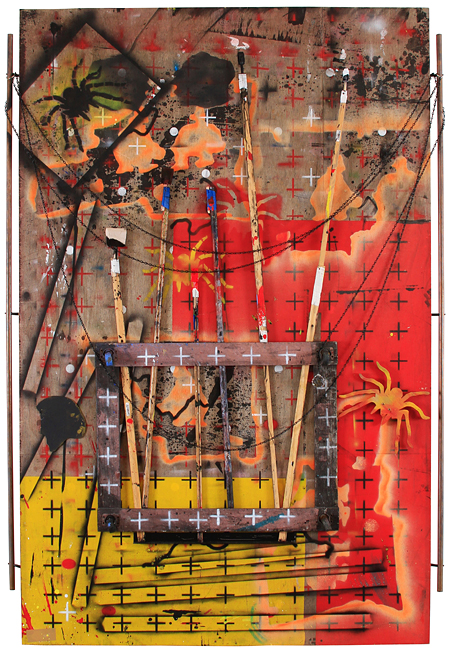 Ed Moses is an absolute phenomenon. Not only is he still making art at the age of ninety, he still has the creative spark that has driven him during a long, illustrious, sixty-year career. To pay tribute to his insatiable search for the "unlimited possibilities of abstraction” we are rewarded with this survey of Moses' paintings and works on paper that is so extensive as to occupy the former Santa Monica Museum along with the host gallery.

This 45-work tribute also demonstrates Moses' ongoing effort to reveal what goes on in the process of creation itself. In other words, how the specific creative approach to each individual work contributes to its ultimate outcome. Moses firmly believes that "the point is not to be in control, but to be in tune.'' It is his approach to each work, not a pre-conceived solution, that primarily contributes to it's ultimate outcome. When surrounded by Moses' drawings and paintings, it is more telling that we experience what goes on in the process of creation than that we simply register the formal image.

Moses was and remains a maverick who steadfastly refuses to follow any established school. As he has reiterated for years, he is driven to leave his mark on the world. That restlessness is central to the spirit of this show, and remains firmly in place at an age when the average person has long since slowed down or stopped.

Included in the survey of this long-ago member of the “Cool School” associated with the Ferus Gallery are never-before-seen works that include meticulous architectural drawings from the 50's; the “Rose" and patterned-pencil drawings from the 60's; cross-hatch, screen paintings, and loose gestural work from the 90's; plus recent works that lead up to Moses’ current “mirror" paintings.

It adds up to a survey that is quite sprawling and immersive by gallery standards, though by no means is it comparable to a full on museum retrospective (see MOCA, 1996). The earliest work here, some drawings dating from the 1950s and 60s, feel like (despite the historical hype of the Ferus connection; see also LACMA’s recent survey “Drawings from the 1960s and 70s” that was shown last summer) they initiate a vision, slowly leading up to the 1970s grid paintings. These simply explode with a mix of energy and control that suddenly set the artist apart from his contemporaries. It is not surprising that he continues to circle back to them, yet the later iterations seen here don’t feel dated.

Consider a 1979 “Untitled” that slashes across the surface, but reveals just enough beneath the interwoven lines so you feel like you are like looking straight down from a great height. Paired as it is with the rapid motion effect of Moses' brushwork, it produces a vertiginous feeling. But then one juiced up red line offers the eye a place to rest — on a color and form that should not. During the 1980s the grids loosen up, and the lines become worms. The most recent stuff is not predominantly black and white, but veers aggressively towards vivid colors of paint on wood with copper wire stretched across the surface, as in “Fly Away” (2015/16).

This is something of a high wire act, and Moses is not afraid to look down. Take the recent “Cuba #2” (2014/15) or “Reverse Grid” (2014). The dominant black lines and strategically executed reds are pushed to the background; cerulean, white and yellow crosshatching comes forward. The deliberate red line that completes the earlier grid becomes a bloody red splat! of a background behind the grids in these images, as though to say the past is over, let’s build something new over it.

If his mostly abstract body of work for periods shifts sufficiently to include spiders (see “Untitled” [1984] or flowers (see “Untitled” [1965]; these surely reflect the influence of close colleague Billy Al Bengston), it’s partially because for stretches of time those marks compel the artist to play them out, partially because they offer a tempting metaphor of the relationship between art and artist. A spider weaves of course, so you can then go back and spend time looking at his diagonal grid paintings with a smile on your face. Moses may be dead serious when applying media to a surface, but there is a mercurial sense of fun conveyed in deciding what to do, and it is infectious.

Moses produces much of his work, particularly the large paintings, in the yard of his Venice studio. Been his favorite place to work for approximately forever. Ninety years on, who knows? Maybe forever is in the cards.