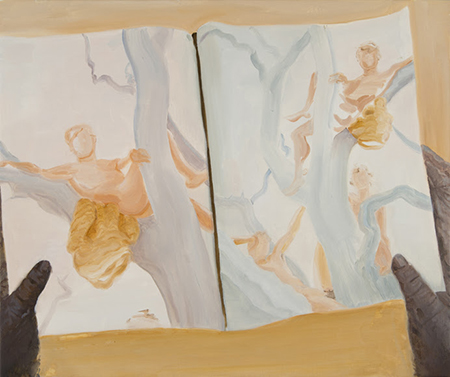 While reading about the civil rights movement of 1963-1964, Julia Brown became interested in an attempt to integrate the “whites only” beaches in St. Augustine, Florida. This was part of a much larger movement in St. Augustine that prompted a brutal response. When black children swam in a motel pool in June 1964, for example, the owner poured acid in the water to drive them out. Brown’s research into the beach protest led her to investigate the nature of boundaries — between races, species and more. A small gouache on paper, “The Fold (Miss March 1965),” references, albeit somewhat abstractly, the first African-American centerfold in Playboy. There is clearly a fold running down the middle of the painting, but the figure is suggested only by part of an arm and three fingers with red fingernail polish. An expanse of mottled pink suggests a woman’s body.

These two events led Brown to dig more deeply into sexual boundaries, one of which is incest. “Theory (Maché)” is a grisaille painting inspired by a book she found in a Paris flea market; the piece depicts a tattered N.Y. Herald Tribune dated Jan. 7, 1970, with the headline, “Did Freud Have an Affair with his Wife’s Sister?” According to the New York Times (11-22-81), an historian who researched this found that it was likely true, and there are indications that Freud’s sister-in-law became pregnant and had an abortion as well.

Brown also explores human-animal relationships. Several paintings reference Lucy (1964-1987), the chimpanzee raised like a human child. Her “parents” taught her to dress herself, sit on a chair at the table and eat with utensils, and look through magazines. It is documented that not only was she not interested in mating with other chimps, but she found humans sexually attractive. In “Playgirl (Frottage),” Lucy uses her finger to stroke a naked woman in a pornographic magazine. In “Lucy and the Skyhawks,“ the primate holds an Australian magazine from the same period with a centerspread of the members of a boy band sitting in a large tree, bare-chested and wearing animal skins. In one of Brown’s explicit pen-and-ink drawings, a chimp sexually engages with a vacuum cleaner. Several nearby paintings document Brown’s partner’s dog with the artist’s underwear. After Brown moved in with her boyfriend, his dog not only hoarded her underwear but chewed the crotches.

The title of Brown’s show is “Skin Trade,” which refers in part to people who smuggle animals or birds across borders. Half a dozen paintings depict various figures in the act of smuggling. In “Collection,” one wears a strange boot-like contraption that wraps the calves, with openings to hold small birds. In “Collection (Yellow),” the smuggler hides the creatures in small bags around his or her chest.

Brown bases her imagery on materials or photos she sees, her daily life, or her reaction to something she is reading. She encountered “Fur Glove with Wooden Fingers” (1936) by the German-born Swiss artist Méret Oppenheim, who exhibited with the surrealists and shared their goal of startling the viewer with unexpected juxtapositions. In Oppenheim’s glove, the fingers are covered with fur, and the nails are painted red. By covering various objects with fur, including the iconic  cup and saucer of “Object (Breakfast in Fur)” (1936), Oppenheim creates multi-layered, sexually charged objects, not unlike Brown’s. Brown’s “Ladies’ Fingers” is a painting of a paw that resembles Oppenheimer’s gloves next to a hand that appears to be part animal, part human.

Brown handles difficult subject matter with a light touch due in part to her inclination toward abstraction. Some may find her images of bestiality, voyeurism and people engaging in illicit activities disturbing. She does not hesitate to tackle controversial issues, and seems to take pleasure in evoking visceral responses from her audience.