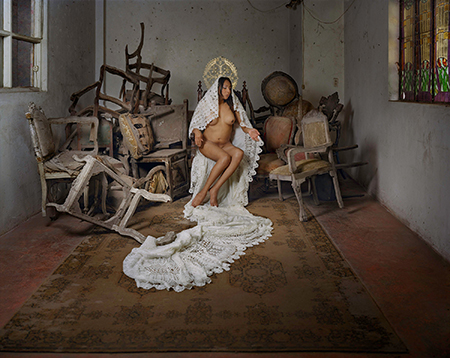 This powerful exhibition of photographs promotes awareness of violence against lesbian, gay, bisexual and transgender communities around the world. Collaborators Juan Jose Barboza-Gubo and Andrew Mroczek step up to inform the world about the situation in Barboza-Guba’s home country, Peru. "Virgenes de la Puerta” is one of two series presented, a collection of portraits and tableaux honoring the strength and resilience of transgender women. As a child, Barboza-Gubo witnessed the public beating of a transwoman on the streets of Lima, and it has haunted him since. In 2013 Mroczek was invited to curate an exhibition by Barboza-Gubo at a Lima gallery, and it was then that he first became aware of the violence against the transgender community. Peruvian transwomen are forced to live on the fringes of society with little or no access to education and healthcare, unprotected by the government from rape and even murder.

Each subject in the 13 photographs was inspired by historical and religious figures in Spanish Colonial painting and 19th-century vernacular photographs. Barboza-Gubo and Mroczek draw from such iconic figures as Santa Rosa de Lima and la Virgen de la Leche (the Nursing Madonna or Our Lady of the Milk). They worked with local artisans to design and produce the elaborate objects used in the images, including silver and gold crowns, a 25-foot hand-crocheted veil, and a “gown” made from hundreds of hand-embroidered flowers attached to a hoop frame. Many of the images were shot with an 8 x 10-inch view camera, which produces visually rich portraits that can be blown up to near life size. Despite their treacherous situations, these transwomen project dignity and confidence.

The second series is composed of three Peruvian landscapes where murders or violence against LGBTQ people have occurred. Each image’s title lists the name of the victim, their sexual orientation or gender identity, and the location and nature of the assault. What appears at first to be simple landscapes becomes a reminder of horrific assaults on innocent victims. By focusing attention on those who are different, these photographs expose the ignorance and fear that too often result in violence.