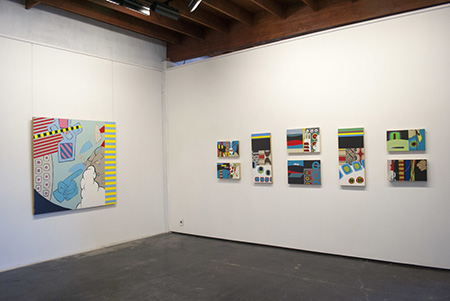 David Michael Lee’s 15-year retrospective “Successions” spans from graduate school to the present. The artist explores in a variety of stimulating ways the formal building blocks of shape, space, colors, lines, and patterns, mostly working on a rough hemp fabric. Lee tackles each challenge with vigor, filling the gallery with multiple series, but not presented in chronological order. The mixing of order provides a meaningful clue to Lee’s art; no matter the timeline, the work is consistently expansive.

Lee views his painting process as a metaphor of characters in a play. Circles in one series may become characters transformed as patterns in another drama. Lines or textures may assume a different dialect, while spatial configurations interact with shapes, textures and dazzling color in yet another scenario. Roles are ever changing as Lee’s painterly characters metamorphose from one series to the next. In this way, Lee continuously sets up visual challenges — how do different color combination effect circles; how does it affect stripes, or textures? Or, what occurs when space is compressed or expanded using patterns, lines or figures? The change of characters in Lee’s metaphors are the inquiries he establishes for himself, living ideas that populate his many visual dramas.

In his "Herb Series (Small),” (2009) dissimilar colors define each plane of different geometric forms. Set against a black background, shapes bounce off the wall, receding and protruding as they seem to become both full-dimensional and yet flat on the taut fabric. "Coastal Seascape” (2014) is a series of gray blue expanses of the sea against aerial views of various warm, brown-toned landscapes below. Lee arrives at a sense of huge space and shape on rather small panels. Transformation is taken even further in "Auth. Kernergie” (2005) a large acrylic painting on sewn fabric, composed of a blast of colors, shapes and figures that grab our attention. Its boisterous atmosphere is something like clanging machinery in motion, a circus in high gear, or a band playing accelerando.

“Oceans” (2007) embraces many of Lee’s recurring characters, which together add up to the show’s central theme. Along the right side of the composition are colorful patterns of boxes, circles, and stripes. On its left are irregularly shaped colored planes that form an abstracted ocean that bobs up and down. But the painting’s essence is in the upper left corner. A far away, small white ship on the horizon slowly moves forward. It heralds the artist’s constant anticipation of the arrival of the unexpected and unknown. Its cargo brings the results of the artist’s commitment to creative inquiry.

The handful of paintings cited here hint at Lee’s dedication to push his visual ideas in various directions, embolding one series with dizzying amounts of color, dots, divisions of planes, sounds and rhythms; emphasizing a quiet simplicity in another. Created in groups, each individual painting is in a constant conversation with others in the gallery, the whole buzzing with energy.