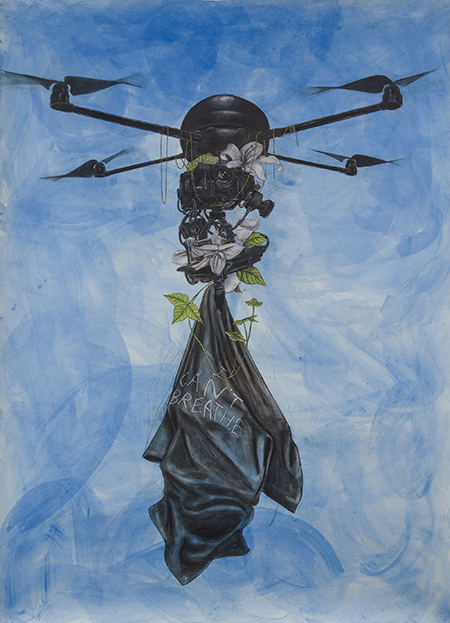 “I approach a piece of artwork as a visual artifact that reflects a specific point in history. The conversation the artwork generates is important. For me, the voice that resonates and lingers makes for the most memorable artwork.” So reads Eleana Del Rio’s Seattle debut manifesto as her new gallery, relocated here after decades in Los Angeles, opens with the first of three introductory surveys of stable artists sharing the theme of identity. The timing of this series couldn’t be better — Seattle’s on a roll and social and political art are all the rage.

Kerry James Marshall is widely considered the leading figurative-narrative African-American artist, an heir to Jacob Lawrence and Aaron Douglas. His three digital print photographs of two young black women and his mother’s death certificate, all shot under black light, are very powerful testaments to  how blackness of fashion-model quality rarely ends up on magazine covers and how something as humdrum as a death certificate can speak volumes. Del Rio’s “visual artifact” becomes “the voice that resonates and lingers.” “Alana” and “Tyla” from the 2012 “Black Beauty” series peer out of the darkness at us with pride and allure.

While Marshall has been expressively documenting aspects of urban and rural black existence, University of Washington professor of art Zhi Lin has been literally digging up and preserving traces of the Chinese immigrant labor that built the Central Pacific Railroad. “Building the Central Pacific by Chinese Workers” (2014) seems at first a long pink and black color field painting à la Larry Poons. With an undertow of concealed meaning typical of Zhi Lin, we learn the vertical posts are rubbings of the railroad ties and tracks, all laid down in Chinese colored inks on Chinese handmade paper: a hand-made artwork about the hands on labor of Chinese immigrants in the U.S. The 55-year-old eyewitness of the Cultural Revolution is represented by two other works, seemingly the complete opposite of the big pink and black painting. The small landscape ink drawings resemble 18th-century English watercolors (he studied at the Slade School in London) but, in reality, one is a scene of a Chinese burial and crematory in Auburn, California and the other is a lovely sketch of a Wyoming quarry — where the 1885 Rock Springs massacre of 28 Chinese miners occurred.

The quandaries of ethnic and religious identities intertwining are explored less successfully in Sandow Birk’s “American Qu’ran” series. Text art is one thing: conceptual, brainy, often irritating or humorous, but challenging for those so inclined. Birk loses me in this dense transposition of English texts over Americana scenes in the manner of Persian illuminated manuscripts. Any interesting visuals are covered over by the tiresome texts.

The de la Torre brothers, Einar and Jamex of San Diego, are known for their sensational mixed-media blown-glass assemblages. The one seen here makes use of lenticular photo printings. The giant blue glass skull, placed dead center, is over the top, like most of their art, but meaning is limited to reminding us of our lives of image and media overkill.

Melissa Cooke combines common imagery, drawn from her walks in Brooklyn, with clichés of peeling paint, posters and graffiti. Realism can so easily repeat itself: Larry Rivers and Jim Dine visited here 60 years ago. Cooke’s giant right-eye close-up of a face, “Luminescence #1” (2012), may be a better example of her chosen powdered graphite medium.

Laurie Hogin of Chicago and Robert Pruitt of Houston are indicative of the wide range possible within a representational continuum that draws equally on Ingres or Max Beckmann. Hogin’s “Echo Turnpike” and two “Chemical Love Birds” border on the dreaded pop surrealism genre, but are rescued in time by their mesmerizing links to natural history illustration. Pruitt invokes the African-American science fiction writer Samuel R. Delany. Outer space is an escape from earthly racism. The young woman and the male astronaut are awaiting release into freedom. More oblique but devastating, in “Archangel” a drone has retrieved a tee-shirt with the legend of Eric Garner’s last words, “I can’t breathe.” Miraculously, Pruitt has treated a coldblooded police killing with subtlety and symbolism.