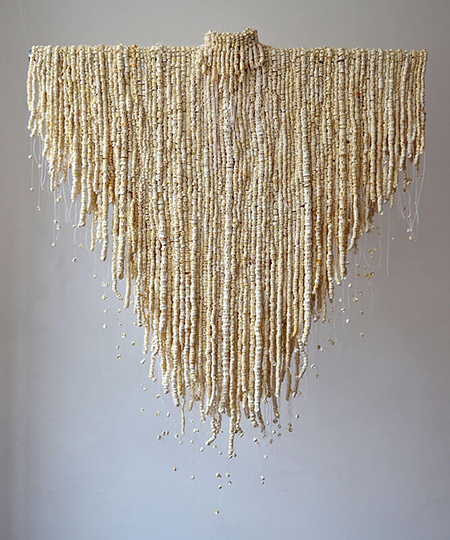 Through the painstaking process of cutting and gluing minuscule pieces of Mexican paper money, Maximo Gonzalez creates collages that are not only beautiful to look at but also laden with commentary about wealth and power. Gonzalez’ series in which quarter-inch-high strips of devalued currency on foamboard are arranged to form miniature labyrinths is complex enough, yet he also compels us to extrapolate messages about the illusory nature of money and the barriers to finding it. Also powerful is “Simple Magma (Green Lots),” in which Gonzalez weaves strips of currency into a six-foot-wide blanket suggestive of the Mexican flag.

The same affinity for the meticulous reworking of mundane materials is evident in the sculptural textiles of Xawery Wolski, who fashions thousands of inch-wide clay beads, individually glazes them, and then crafts them into long strands that in turn become glorious robes, collars and mandalas in either gold, silver or white. In those robes where the arms are spread wide, the Crucifixion comes to mind. But Wolski’s work could also be read as explorations of primitive cultures and bygone customs, with medieval chainmail coming to mind in one particular silver vestment. In other works, Wolski wrests beauty from extremely thin wire, crocheted into globes that hang from the ceiling, and from tiny fishbones that are arrayed into a three-foot-wide white shawl.

By coincidence, both Gonzalez, who is Argentinian, and Wolski, who is Polish, live and work in Mexico City. Both artists, less coincidentally, command admiration for their repetitive and meditative practices whose focus and discipline yield transformative pieces.