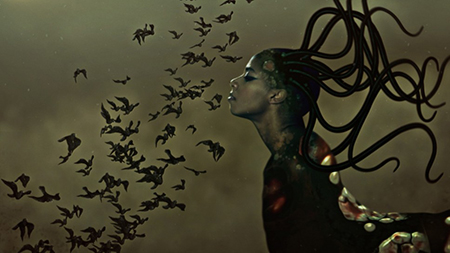 About a week after the opening of "20 Years/20 Shows," I found Terry Allen's contribution bathed in the ominous blue light of videos on standby. The New Mexico artist stood between spindly ladders and a folding table littered with tools and detritus, staring up at two projectors mounted on rails. For his piece "MemWars," the projectors were supposed to travel the length of the space as two videos played, leading to a third projection at the far end of the room. Things were not going as planned. In lieu of discussing the temporarily downed artwork, I asked Allen if this show has made him nostalgic for his past work with SITE Santa Fe. "20 Years/20 Shows" honors SITE's anniversary with a series of small exhibits featuring artists who have previously appeared in the contemporary art space. "Oh no, I never think about things that way," Allen responded. Alas, for the moment, his viewers were left to scare up ghostly memories of his clever video puppet installation from 2010's "One on One" exhibition. In a startling turn for a contemporary museum, the past had eclipsed the now.

In the next room, Brooklyn artist and 2006 SITE Biennial contributor Wangechi Mutu engaged Los Angeles artist Edgar Arceneaux in a site-specific collaboration. Over the course of several days, they filled five of SITE's expansive walls with markings of paint, graphite and other materials. One stretch shows a floating orb of intertwined snakes, with blood red snake heads surrounding it like a cloud of sparks. In another passage, dense drips of earthy pigment make up a primordial landscape. Across the space, airbrushed clouds of black creep towards the ceiling. Yet another element encourages visitors to leave their mark with pencils, cactus wood and rocks that dangle on strings. "Pencils need sharpening," one visitor had scrawled on the wall.

But for the exhibit's collaborative premise and some repeated imagery, the installation seemed disjointed and rushed. There were only glimmers of the Nairobi-born Mutu's genius for combining tangled figures with spectacularly bizarre mixed media elements. In an adjoining space, Mutu presents a more successful project, her first animated short, "The End of Eating Everything." The video features American recording artist Santigold as a monstrous zeppelin made from garbage and grasping arms. The heaving figure is locked in a fierce battle with a murder of crows. This critique of mass consumption brings the world of Mutu's paintings into eye-popping motion, but its triumphant excesses compounded my befuddlement with the glut next door.

Uruguayan artist Luis Camnitzer, an alum of the 2007 show "The Disappeared/Los Desaparecidos" and SITE's 2014 biennial, fares better. Camnitzer presents two installations that he created 40 years apart. In "The Shift of the Center of the Earth," (1975), a mason's plumb on a string projects from the wall as though magnetically attracted to a golden plaque on the floor. His 2015 site-specific painting "Cardinal Points" challenges viewers to navigate a room full of blank, monumental atlases, each named for a cardinal direction. Two smaller map-inspired works strengthen Camnitzer's theme of disoriented navigation — ironic, considering his exhibit's concerted trajectory in comparison to the rest of the show.

The next day, I returned to SITE to re-experience Terry Allen's artwork. This time, the videos were playing and the space was clear, although the projectors were still stubbornly frozen on their tracks. The videos on opposite walls play talking head dialogs between Allen and his wife Jo Harvey. In a number of synchronized segments, the couple reminisces about friends and family who have been affected by war (hence the title "MemWars"), after which the third projector springs to life and shows the artist playing an original song on his keyboard. It's poignant storytelling, and despite Allen's protestations, his songs are filled with tenderness and loss of nostalgia. "So now, it's as if your memory is another movie, crisp, clear and technicolor," says Harvey. "But then clouds come, or smoke from the big guns growing thicker and thicker, and concealing pieces and parts until the only things real are a few broken fragments peeking through." SITE's institutional memory of its varied and colorful history seems equally piecemeal, at least in this retelling.