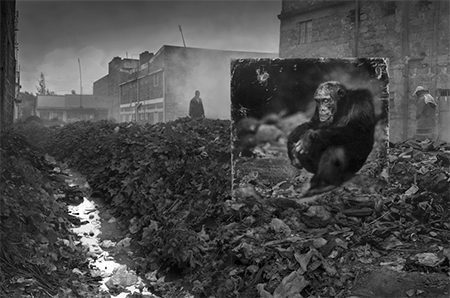 Nature photographer Nick Brandt has been documenting the wildlife of East Africa in beautiful black and white prints since 2001. Along the way he has captured images of powerful lions, elephants, giraffes and other formidable beasts living within a vast natural landscape of windswept grasses, rivers and plains. His new series “Inherit the Dust” is strikingly different and far more arresting than the earlier work.

These new black and white images revisit many of same landscapes where Brandt previously documented wildlife. But only a few years later, gone are the trees and grasses, replaced with bare roads, rudimentary factories, cement overpasses or mountains of steaming garbage.  What differentiates these stunning pictures documenting third world poverty and unregulated development from other, equally beautiful photographs of similar scenes is the shocking visible presence of the now vanished animals.

Using his original photographs the artist works with a team to position giant, true to life-sized images of the vanished beasts back in the same landscape they once inhabited. Then, like visitors from another world they are re-photographed in situ. By physically inserting the images of elephants, giraffes, rhinos, lions or other beasts back into a radically altered landscape he creates a powerful juxtaposition that is both profoundly disturbing and quite revealing.

“Road Junction with Qumquat & Family” shows a mural-sized enlargement of a family of elephants protectively encircling a young calf. It’s been erected on a narrow island of bare ground between two roads and photographed as heavy, big wheeled gravel trucks rumble within a few feet on either side. We are struck first by the way the trucks’ scale and mass rivals that of the big lead elephant facing us. Then we notice the way the entire herd has drawn into a tight, outward facing circle enclosing the baby. Brandt’s insertion of the animals’ circle makes the trucks into a tangible threat. It’s a confrontation that makes us look questioningly to the men skirting the vehicles along the sides of the road, oblivious to what has been lost or any possibility of danger that the trucks or now barren land might present to themselves.

The way we have become numb to the perils and destruction that humanity’s progress has created forms a poignant subtext to many of these images. We have grown inured to pictures of starving children or the skeletal bodies of refugees waiting for food. But we touch on a shared sense of global destiny when looking at the stark shadows of a female cat’s ribs as she stands staring at a grey stretch of barren urban ground in “Railway Line with Lioness.” Another photograph showing a downcast dark ape positioned so he sits beside a bright strip of water that snakes through a garbage strewn alleyway where no one walking seems to mourn our complacency just as certainly as his own exile.

By carefully matching horizon lines and cloud filled skies to the ones in the original photo Brandt gives these combined images a sense of merger that often powerfully amplifies the incongruity of a scene and the story it tells. “Wasteland with Lion" presents a chipped but elegant image of a majestic male lion, face turned towards the wind, at rest on a hill that is now thick with garbage. He seems to be watching dark figures nearby picking through the trash for food as white clouds of steam rise up from their labors to mix with the storm-filled sky. The regal beast’s calm presence returns the trash dump to the savannah it was, presenting it now as a haunted grey and black hell.

How do you visually show absence and the meaning of something that’s lost? Brandt’s images of vanished wildlife appearing again amidst their radically transformed landscapes jiggle the thick clouds of forgetting created by a present moment that never appears to be empty, even when it is in shambles. Seeing the beasts in situ reminds us of what is gone, but also seem to ask if we are not all tied to a single rope and disappearing down the same hole.