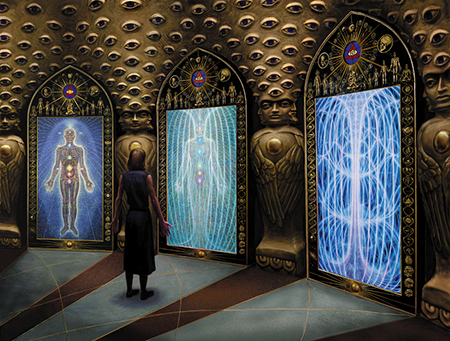 Alex Grey, Rendering for the "Chapel of Sacred Mirrors" at Entheon, projected to open on the CoSM campus, Wappinger, New York, in 2017.

During the same period that Beth Ames Swartz was creating her installation "A Moving Point of Balance” [see the February 27, 2016 Weekly Newsletter — Ed.], the New York-based artist Alex Grey was working on a series of paintings, begun in 1979 and completed in 1988, that would eventually comprise the "Chapel of Sacred Mirrors," aka "CoSM", an artist-designed sacred space that was housed in a Chelsea loft from 2004-2009 and then moved to a permanent home on a 40-acre retreat in Wappinger, New York, located 65 miles north of New York City. Like the paintings in Swartz' installation, those in Grey's series explore the bond between human beings and divinity, are inspired by multiple religions, and function as non-denominational vehicles for celebrating our shared spirituality.

Overseen by Grey and his wife, the visionary artist Allyson Grey, the Wappinger grounds are known as the CoSM campus. Currently on view there in the Grey House, a restored Victorian building, the "Sacred Mirrors" will be soon be installed in “Entheon," a sanctuary for visionary art designed by Alex Grey. Entheon will also house Grey's "Progress of the Soul” series, along with works by Allyson Grey and other visionary artists. The target date for its opening is 2017, the same year that Ellsworth Kelly's chapel is expected to be up and running in Austin [see the January 23, 2016 Weekly Newsletter — Ed.].

Like Swartz' "Moving Point of Balance" installation, the paintings in Grey's "Sacred Mirrors" series are arranged in a progression, with the intent being to align oneself face to face with the imagery. Grey's sequence is divided into three sections: body, mind, and spirit, a progression that takes us from the material world through transformation into the metaphysical realm. As we journey through the installation, our focus is directed first to our exterior and interior physical appearance and structure, then to our sociopolitical nature, and, finally, to our bond with the larger universe. Abstract light becomes increasingly dominant as the imagery unfolds and, in the final works in the series, we witness what Grey often refers to as the "net of being," the invisible matrix of energy as light that unites all matter as one.

Grey is one of those artists who, over the years, has often been overlooked by critics because he paints in a traditional style  regarded as illustrational. I have always questioned the basis for such elitist marginalization. Before Grey began concentrating on painting, he was a daring and innovative performance artist. In the 1970s, he and Allyson Grey performed several public rituals that were informed by the revelations they experienced when they took psychedelic substances together, as well as by their interests in both Western and Eastern religions. But performance art, while celebrated in academic contemporary art canons, has a limited reach. Performances don't happen very often, and those who attend them are among the most minute percentage of the population at large.

So, when Grey decided to leave the avant garde formats behind and turned to painting in a style that is accessible and visually appealing, he instantly increased the potential for getting his message across to greater numbers of people. The message, of course, is simply the same as that which is also embodied in the hippie slogan that I have always admired, "One planet, one people." Grey's so-called illustrational style, which allows him to show our physical interiors and the light that is both within and external to us, permits a clear and straightforward presentation of how we all exist as spiritual beings. His ability to create colorful, gem-like, luminous surfaces makes the work all the more effective.

For me, the power of Grey's art was really put to the test when I included his painting "Journey of the Wounded Healer" (1984, collection of the Museum of Contemporary Art, San Diego) in the exhibition "Psychedelic: Optical and Visionary Art since the 1960s."  This exquisitely painted triptych, which explores the human transformation from birth to enlightenment in a complex and compelling manner, was a radiant jewel among jewels in a gallery that also included masterful paintings by the likes of Victor Vasarely, Richard Anuszkiewicz, Frank Stella, Jack Goldstein, Fred Tomaselli, Robert Williams and Lari Pittman.  Moreover, while working on the exhibition I learned that Grey has become an important role model for Millennials, who showed up in droves three hours early to stand in line for an artist conversation that I held with Grey at the San Antonio Museum of Art.

Alex and Allyson Grey's retreat at Wappinger, currently a work in progress, is a great example of visionary artists achieving their vision. Among the many events that they offer visitors, who can stay overnight in the guesthouse, are "art church," celestial gatherings, full moon gatherings, visionary salons and workshops. Visitors may also spend time meditating or musing introspectively about the nature of existence while contemplating the wonderful series of paintings that started it all, the "Sacred Mirrors.”