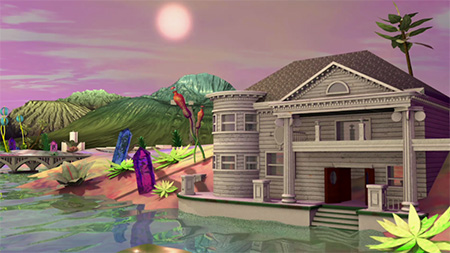 The late Thomas Kinkade was the Rodney Dangerfield of the art world. He got no respect — and with good reason, if you ask most critics. But here in Oregon, two very different Kinkade-centric exhibitions have recently revisited the question of whether the self-branded “painter of light” deserved his déclassé reputation. At Oregon State University’s LaSells Stewart Center, “What Will Last” [Closing March 15 — Ed.] is one of the first major showings of the artist’s paintings and prints since his death in 2012. It’s an authorized, reverential survey mounted with the blessing of his family and organized by Charles Kelley, a friend he met through a Christian evangelical group. The second exhibition, “Pain Tero Flight” (a play-on-words of “painter of light”) was shown at Upfor Gallery in Portland in February. It spotlighted new works by eight emerging and mid-career artists, all of whom were asked by gallery director Theo Downes-LeGuin and co-curator Alicia Eler to critique Kinkade’s contested oeuvre. Using a slew of traditional and new media, the artists zeroed in on Kinkade’s shrewd marketing and unabashed sentimentality.

In early February I sat on a panel with LeGuin and participating artists Ray Anthony Barrett and Ralph Pugay. During the discussion and Q&A, the artists and audience members, rather than dismissing Kinkade outright, took pains to grant him a grudging respect, if only for his prowess in transmuting cloying Anglo-Saxon pastorales into cold, hard cash. More than one participant invoked comparisons to Jeff Koons, another artist/entrepreneur with lowbrow subject matter and high-dollar sales. But whereas Koons actively engages critical discourse, Kinkade eschewed it. His concerns simply did not intersect with the trajectory of modernism and contemporary art.

If one were to try to plot Kinkade within an art-historical context, where would he fit? I’d put him on a similar page with Nathaniel Currier and James Merritt Ives, the printmaking duo who built an empire on scenes of idealized Americana in the 1800s. He also shares some common ground with Maxfield Parrish and Norman Rockwell (although those artists were far more talented), as well as Pop artist Peter Max, who, like Kinkade, has sold prints in dedicated retail outlets in shopping malls. Just as Parrish exalted the arcadian, Rockwell the homespun and Max the psychedelic, Kinkade trafficked in the essentializing of a spirit-balming ideal. His best-known works played variations on an archetypal image: a thatch-roofed cottage by a stream, gated garden alongside, chimney emanating smoke-puffs, windows aglow with honeyed light, while an inferred but never-seen family gathers inside around the hearth, probably drinking hot cocoa, wearing cardigans and being very, very wholesome.

This would be rich subject matter for parody, but unlike Andy Warhol, Kinkade was bereft of ironic distance. Unlike Odd Nerdrum, he never considered his work kitsch. No, Kinkade played it straight, never winking, always catering to a subset of art appreciators who wouldn’t have been caught dead at The Armory Show. Further, many of his prints were captioned with Biblical quotations, and his marketing team relentlessly targeted a conservative Christian audience. This pious posturing further complicated Kinkade’s standing, as it often stood in conflict with his behavior.  The accusations leveled against him by associates of financial and sexual misconduct, his drunk driving conviction, public-intoxication spectacles and eventual death from alcohol and prescription-drug poisoning lent his public persona more than a whiff of hypocrisy.

None of that really bothers me. Few of us live in glass houses. My beef with Kinkade is that he just wasn’t a good painter. He might have made a decent stop-motion animator in the era of “Snow White,” “Pinocchio” and other cartoons heavy on half-timbered hamlets. But although he fancied himself in the lineage of J.M.W. Turner, he lacked the technical chops, aesthetic vision and restless impulse toward innovation that distinguish artists who rise above mediocrity. His greatest artistry, quite clearly, was financial. While the cognoscenti tuned out, Kinkade cashed in. To borrow a phrase coined by the pianist/showman Liberace — another figure dismissed by critics but beloved by the hoi polloi — he “cried all the way to the bank.”