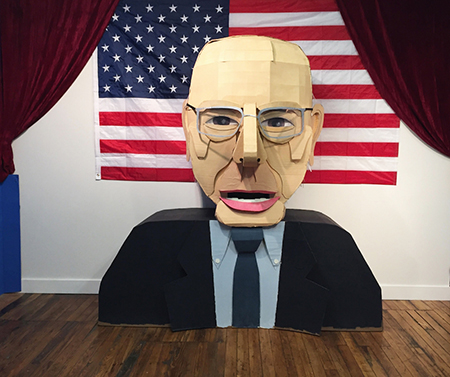 Art writers are often presumed to be “clothed in immense power,” to quote Lincoln, but the truth is humbler: we’re not endowed by our Creator with any such thing. We are constrained by the format of the review or article; by our roles as taste-makers and valorizers — at worst, mere blurb producers. And, of course, by our aesthetic, literary and other limitations. One reason that I enjoy writing editorials for VAS is the broader mandate, the shaking off of the usual constraints.

This morning I awoke thinking about how political change in this country, so long dominated by corporate interests, is now possibly on the point of realization. With its loss of the majority in the Supreme Court, with widespread disgust at the childish, obnoxious behavior of its presidential candidates, with the general realization that the Republican-controlled Congress has been an odious sham, the time is ripe for change.

For too long reform has been thwarted by a myth fostered by cynical, powerful interests: that government by the people, of the people and for the people, which The Great Emancipator cited as the predominating issue of the Civil War, cannot prevail, and is in fact an impossibility; that government, to quote the Great Communicator, is the problem, not the solution. Americans who learned their history from textbooks published before Texas school boards began to dictate content, recognize the dishonesty of the Big Lie promulgated by the Koch brothers’ and Fox News’ Ministry of Truth, i.e., that our ‘betters,’ the one percent, the ‘job creators,’ are the only ones fit to lead (and profit, since God desireth them to have nice things).

Unfortunately, many people less conversant with reality and history have been conned into believing that their once-revolutionary religion really stands for racism, greed, snobbery and xenophobia. In God We Trust, really? The party of Lincoln has been gradually invaded by the old Confederacy, since the civil rights legislation passed by Lyndon Johnson in 1964-5 drove white supremacists into the welcoming embrace of Nixon’s Southern Strategy. His successors have played the race card, either overtly (the egregious Trump) or covertly (the avuncular Reagan). So the red Republican states now coincide largely with the old CSA. That the Republican business elite have for decades snookered the white working class for votes is now evident to all; not just to the followers of the false messiah Trump, but even to country-club Republicans who believed their own press when it was to their benefit to do so. Mundus vult decipi, the world wants to be deceived

So what does this have to do with visual art?

Artists have traditionally served wealth and power, giving aesthetic form and validation to the creation myths of the ruling classes, a point made by postmodernist theorists in the academy. (This of course does ipso facto not invalidate the art that resulted; and bad art can conversely spring from the best of intentions.) Since the collapse of royal and aristocratic patronage in the early nineteenth century, artists have been free agents of a sort: aesthetically independent, working on spec, but still reliant on patrons. At first, the educated bourgeoisie and, for past the half century, a range of self-selected individuals from cultivated avant-garde collectors to investors with social aspirations. Artists are in the schizophrenic position of being expected to be rebels, but of a rather tame institutional sort fit for the international art-world's monoculture, a certification system fostered by art fairs and tourism-hungry art museums.

Art will never be free from financial constraints, but artists should wary of according too much importance to financial success. Most artists who care about creativity and self-expression eventually confront the choice between making work they want to make and making a career of it. American culture values visual art only once it has been monetized, alas.

Artists are almost universally politically liberal and progressive (yes, we are all individuals and of course there are exceptions!), so the opportunity for social and economic change represented by Bernie Sanders is galvanizing in the last year of the Obama era. After his unexpected victory in industrial, Rust-Belt Michigan, claims that the democratic socialist Sanders was unelectable sound hollow indeed when echoed by the mainstream media. Is he instead ineluctable? Time will tell if America is ready to grow up, face reality, and show up at the polls. (I see that MSNBC’s house conservative, Joe Scarborough, has acknowledged, apparently after a Pauline epiphany, that “It never trickles down.”)

Smell the coffee, please, working-class conservatives; cast off your anti-gubmint white fright and know that Reagan’s version of the shining city on a hill was a Madison Avenue fantasy. You too, Millennials, all 83 million of you; cast off your hipster cool. You are not idle, detached aristocratic flaneurs, as college in the theory era and consumerism have taught you. As citizen-voters, you are clothed in immense power. As the activist San Francisco deejay/reporter Scoop Nisker said back in the 1960s, if you don’t like the news, go out and make some of your own. This is not the election to sit out.

PS. Incidentally, as for candidates being imperfect, and unworthy of your vote, please heed Thomas à Kempis: De duobus malis, minus est semper eligendum: "Of two evils, the lesser must always be chosen.” And another old saying: Don’t let the perfect be the enemy of the good. It’s the economy, stupid! WWJD? For that matter, what would Bernie do? WWBD?