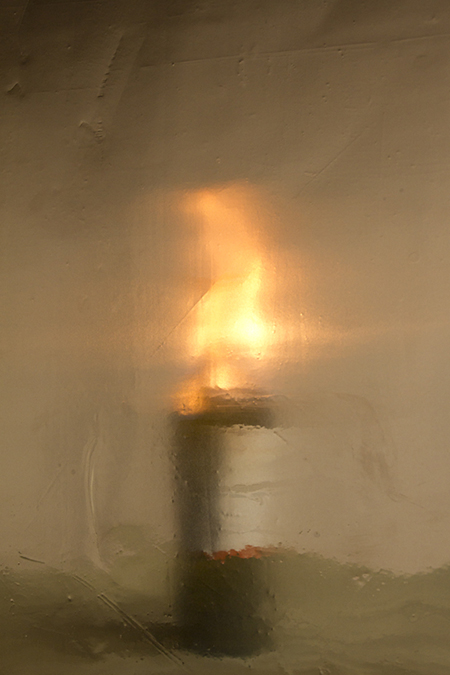 The work of Ryan McCann has become synonymous with fire. Utilizing a technique that allows him to paint photo realistically with a blowtorch, this destructive force is reinvented in his hands as he blends tones with ease on wooden surfaces like it’s charcoal. Using a method he calls pyrography, even McCann’s own signature is a small flame with his first initial applied inside the contour of the brand. Yet his aesthetic reach extends beyond this challenging process as his oeuvre often plays with symbols from contemporary culture that draw the viewer in like a moth to a flame.

McCann’s work addresses humor as well. His “Death to...” series features works killing off contemporary art heroes like Jeff Koons and Shepard Fairey with aspects of their own work. From sculpture to painting, all of McCann’s work contains a physicality that’s applied through its execution and/or the treatment of the subject within the work.

"Random Act of Fire," McCann’s newest series, is based in photography, a new medium for the artist that he approaches with an interesting perspective. The role of fire sometimes appears as a subject in this series but it also serves as a lighting agent. In each of these new pieces, the composition and subject appear to be conventional. They are simplistic still life arrangements or portrait sitters with minimal backgrounds that force the subject into the foreground.

In fact, it’s quite difficult to tell from a distance that these photographs are not paintings. The blurred imagery appears painterly and provides a rich surface to engage, as creases and sharp lines mimic expressionistic brush strokes. The photo “He’s a Wino Tried and True” features a bottle of wine dead center in the composition. At the top of the bottle a flame protrudes mysteriously like a Molotov cocktail. The somber aesthetic matches the title, which is also the opening lyrics to a song entitled “Let Him Roll” written by Guy Clark and performed by Johnny Cash. The blues lyrics are about a deceased man who worked just about everywhere and thought that heaven was just a Dallas whore. A symbol into a larger story, the burning bottle is captured in its most excited state before it burns out.

The portrait style photograph entitled “As a Politician He Had to Wear Many Faces” depicts what would ideally be a formal portrait of a man in crisp suit and a patriotic red tie. It’s an image that often hangs in government buildings. These pictures pay tribute to local leaders and signify elected officials. But this portrait is scared. A large diagonal crease runs across the center so that the face and clothing of the individual are blurred beyond recognition. It draws a similarity to Bay Area Figurative Movement, a west coast alternative to abstract expressionism that favored the figure yet obscured the personal details.

McCann’s imagery does more than shield an identity. It rather suggests a true one below the surface. A portion of the man’s profile seems to materialize just below his chest as the creamy skin color looks like it slid off the surface and melted down his suit jacket. Although there is no reference to fire, the light that dances around the exterior of the image is warm with copper tones and suggests heat. Whether it’s a mask he wears intentionally or a false exterior that developed over time, the portrait is physically disturbing and speaks to the discomfort of false identities.

Everything sounds violent when you think about McCann’s approach to making art. The physicality of working with wood and his history as a collegiate football player may have something to do with this. The exhibition title, “And Suddenly All His Problems Disappeared” alludes to fire as well as the process of transforming the real into something symbolic. McCann eschews digital manipulation and everything is captured in the moment, which makes the final image all the more appealing.

McCann continues to improve his ability to uncover something beyond the surface. Melting away the exterior of these composed arrangements, there are darker and more serious undertones lurking beneath. The painterly quality of the photographs does not serve merely as a texture but rather as the guts of these problematic subjects.