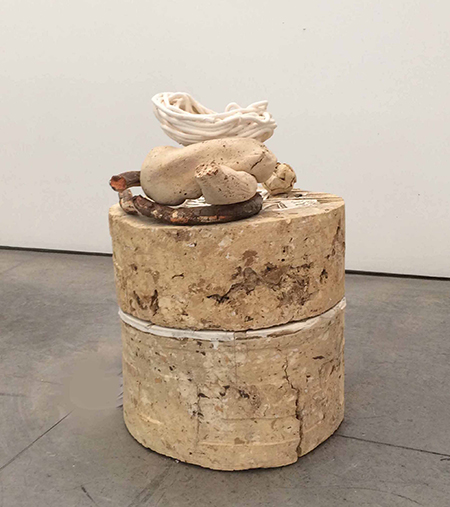 For her current show “Time Stands Still,” Patricia Sannit stacks cylinders of reclaimed clay and wood — replete with incised shapes and patterns, light glazing and small found objects. The works seem rough-hewn yet are sophisticated sentinels, compelling close examination once you realize they are metaphors for humanity’s repeating cycles of history, civilization and destruction. In an inspired idea for displaying her 13 sentinels, Sannit rings them around a 13-foot-wide slab of wet clay, inviting viewers to step on the clay and make their own transitory and personal, yet metaphorical marks. In the middle of the slab are dozens of squat cylinders, variously incised with geometric symbols recalling pictograms. Rounding out the installation is the projection of aerial photographs onto the wall behind the slab, where symmetrical images of old and new cities are given a frieze effect.

The stacks are intended to represent slices of time, while incisions into the clay represent communication. The insertion of found objects reference which aspects of civilization we revere and which we discard. Not surprisingly, but of central interest, many of the sentinels are named after an ancient Middle Eastern civilization. An example is “Homs,” about two feet high and crowned by a long, loose coil of clay. Homs is a Syrian city at least 2000 years old, now crumbling amid the country’s civil war. The five-foot-high “Caryatid,” referencing by title and style a Greek female figures that also served as architectural columns, features a tipped ewer atop an eroding female torso. The overriding message of Sannit’s installation is that art — and in this case a malleable material like clay — is capable of summoning latent memories about humanity’s precariousness through time.